B Is For Zoe Bell 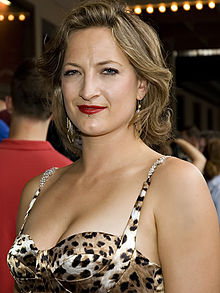 It's Day 2 of the Big A to Z and things are moving right along. Please check out the other awesome participants by clicking the button on the top right of my side bar.

I know many of you probably thought I would spotlight Katheryn Bigelow, first female winner of the Best Director Oscar and whose film, Zero Dark Thirty, was nominated for Best Picture this year. But I want to shine a light on talented and powerful women in Hollywood you may or may not know. One of these amazing ladies is stunt woman and actress Zoe Bell.

Her career started in 1992 at age 14 when she jumped out of a car for the New Zealand soap Shortland Street. She moved on to do stunts for Hercules: The Legendary Journeys and Xena: Warrior Princess, where she doubled for Lucy Lawless. At one point, she fractured a vertebrae doing wire work and continued to work for a week until a chair smashed across her back during another sequence put her out of commission for a while.

She doubled for Uma Thurman in the Kill Bill films, where she learned to fight wushu style for the job. Zoe  impressed Tarantino so much that he gave her a role in his Grindhouse feature Death Proof. Bell has gone on to do stunt work in other Q projects including Inglorious Basterds and most recently Django Unchained. Her other stunt work includes such films as Ultraviolet, Catwoman (where she performed a 200 foot fall), Poseidon, Penny Dreadful, The Kingdom, The Collector,The Proposal, Hansel & Gretel: Witch Hunters and the new Tom Cruise film, Oblivion, where  she also has a small role.

Bell also has twenty-two acting titles to her credit including Whip It, Gamer, Oblivion, The Baytown Outlaws as well as such television shows as Lost, CSI: Miami, Alias and Hawaii Five-O.

Zoe has won three World Stunt Awards, one for Best Fight and two for Best Overall Stunt by a Woman.
She has been nominated for and won a Maverick Movie Award for Best Stunt. Bell has a reputation for dedication, skill and focus. I think she is one bad ass bitch, making her way to the top in a very masculine environment.

Are you all enjoying yourselves so far? I'm really digging all the posts I've seen so far.
Posted by Unknown at 10:51 PM