I Is For Ida Lupino 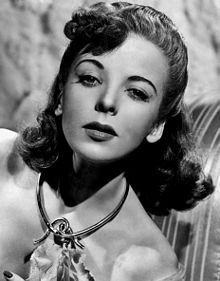 Thank God it's Hump Day. This week has just been kicking my ass. I think I've gotten 10 hours of sleep total in the last three days. Oy! Anyway, I've been out and about in the A to Z as much as I can, which is definitely a lot less than I want,still I am seeing some really great themes. Like Mina Lobo's Aphrodisiacs at Some Dark Romantic, Gwen Gardner's The Paranormal Case Files of Indigo Eady and Melissa Sugar explaining interesting legal terminology with awesome examples over at Have You Heard.

I'm going back old school yet again with my choice for letter I. My pick is Ida Lupino. She was an actress, writer and director back when a woman doing any of these things in the film industry was almost unimaginable. Ida got her start in 1931 and often referred to herself as the "poor man's Bette Davis" acquiring a number of roles that Davis had turned down. She starred opposite major stars like Humphrey Bogart in High Sierra and Steve McQueen in Junior Bonner. Ida was also famous for spending a lot of time on suspension for turning down roles she felt were "beneath my dignity as an actress. High five, Ida, you tell 'em.

While on one of these numerous suspensions in the late 40's, Ida started to think about directing films. To that end she and her husband Collier Young formed an indie film company The Filmmakers. The company produced twelve feature films, six of which she directed or co-directed, five she wrote or co-wrote and three she acted in. She made low-budget, hard-hitting films about issues like 1950's Outrage, about a rape and its aftermath, Ida also stepped up to direct Not Wanted after director Elmer Clifton suffered a mild heart attack. She earned high praise for the film and was even invited to the White House by Eleanor Roosevelt. to discuss this feature at length. Lupino also became the first woman to direct a film noir with 1953's The Hitchhiker.

Her directing began to focus more on television as her career behind the camera progressed and she directed episodes of popular shows like The Twilight Zone, The Rifleman, and The Fugitive.My girl has two stars on the Hollywood Walk of Fame for her contributions to film and television. She also won the inaugural Saturn Award for Best Supporting actress for her work in The Devil's Rain.
Posted by Unknown at 3:10 AM