Hey Imaginarians I'm surfacing in for a minute to tell you about a great new novel coming out and to show off the absolutely stunning cover. Mina Lobo, my gorgeous friend from the brilliant Some Dark Romantic is getting ready to release her debut novel this September. Here's a bit about Mina and her awesome book... 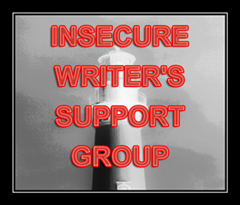 Hey Imaginarians, I know I've been sadly absent of late, but today is the IWSG and I just had to return for a bit because I love this group. Thank you, Captain Ninja Alex!

In light of my deadline ahead, I want to talk about emotion in writing. Not the emotion of the story, but your own emotional health. I've been going through a lot of late and my cynicism, bad attitude has been showing in all my writing. Which is not good when I am trying to craft hot scene between my characters or even when I am trying to leave a simple comment for someone.  My good friends have remarked on it, so I am trying to get in a good headspace. If you are under duress, stress , craziness, etc it will show in your writing. So take care of yourself before you sit back in front of that computer no matter what kind of deadline you are under.

Be well, my friends. And good luck with all your creative projects ahead.

Back to lurking about, writing and edits. See you soon!
Posted by Unknown at 8:09 AM 14 comments: