A Is For Dorothy Arzner 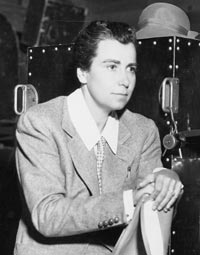 Today kicks off the Awesome and Incredible A to Z Challenge. Yay!!! It was started by the most amazing man, Arlee Bird. Thank you, Arlee, for bringing our community together with this wonderful event. A huge, warm welcome to all first timers here and of course, all my friends. I love having you here and it makes me smile that you have chosen to visit my little corner of the blogosphere. You can visit my fellow participants by clicking on the button at the top right of my sidebar. Have fun!

My theme this year is Powerful Women In Hollywood. I am including trailblazers among this crowd and first up is Dorothy Arzner. Her directing career spanned the 1920's to the early 1940's and she was the only woman working as a director at this time.She is also the woman with the greatest number of directorial titles to her name with 21.

Growing  up in L.A. where her father owned a restaurant frequented by celebrities, Dorothy actually first dreamed of being a doctor.To that end she attended the University of Southern California. During her time there, World War I broke out and Dorothy left to be an ambulance driver near the Western Front. After her experiences during the war, she left her pursuit of medicine to concentrate instead on making films.

She joined Paramount Studios in 1922 as a stenographer, then scriptwriter. From there, she moved quickly into film editing where her first assignment was Blood and Sand starring Rudolph Valentino. Impressed by her work on the film, director James Cruze hired her as editor and writer for some of his films. Dorothy directed her first film in 1927, Fashions For Women. It was a financial success for the studio and led to other projects. She directed silent film star Clara Bow in her first talkie, The Wild Party. Set in a woman's college, the film projected strong-willed, independent and free-thinking women. These female character types were a hallmark of Arzner's work. Another theme to her work were the underlying lesbian tones, which were promptly villified after the Hays Code went into effect. In 1932 she left Paramount to pursue her craft as an independent director. During the 30's she worked with such  notable actresses as Katherine Hepburn (Christopher Strong) Joan Crawford (The Bride Wore Red) and Rosalind Russell (Craig's Wife). In 1936 she became the first woman member of the Directors Guild of America.

She retired from directing feature films in 1943 and went on to direct television commercials, produced plays and eventually became a professor at the UCLA film school where she taught until her death in 1979.

SPOILERS AHOY (I MEAN IT, IF YOU HAVE NOT WATCHED WD, DO NOT READ)

Okay, last night was the season finale of Walking Dead and Oh.My. GOOOODDDD!!!!! So much happened. We said good-bye to Milton, poor little misunderstood geek. I really gave him a hard time and was oh so wrong about him. First, he got his ass beat by the Gov, who figured out it was Milton that BBQ'd the walkers. Then, when he won't kill Andrea, the Gov stabs him to death, told him was going to kill Andrea one way or another. Props to Milty for hanging on as long as he could to give Andrea, handcuffed to the dental chair, a fighting chance. Governor Pyscho Pants wasn't finished, though. Oh no siree Bob he wasn't. He took Team Woodbury to annihilate Team Prison and when they got their asses kicked, Old boy finally drop-kicked what was left of his sanity and killed Team Woodbury. And that little bitch Allen bought it with a head shot by the Gov during the slaughter. Buh and Bye.

Now we come to Carl.  He killed a kid from Woodbury during the fight even though the teen was surrendering to Carl and Hershel. Hershel may have been horrified and I was for about a second. But Carl had to put that kid down. He was defending his baby sister, whom Rick had entrusted to Carl. When it's babies, there is no hesitation. Shoot first, then ask what's going on. I'm pissed at Rick for even trying to take Carl to task over it. I mean, didn't the Ricktator put down two guys, no hesitation, at the bar back in Season 2 when it appeared they were a threat? Hello Pot, it's Kettle. And Carl coldly pointed out that any attempt at mercy or even a hesitation gets you killed. He failed to kill the walker that came back and killed Dale, Rick failed to kill prisoner Andrew and Andrew got Laurie killed. Rick failed to kill the Governor at their meeting and look what happened. Sad and scary, but Carl is right.

Moving on to Andrea. I have never really liked this woman at all. She was showing signs of getting cool, but then she banged the Crazy Train. I wanted her gone, gone, gone. I got my wish, but she went out with dignity and took walker Milton with her. I thought I would be doing the Happy Dance, but it was kind of sad. And we end with the remnants of Woodbury moving into the prison while the Gov and his minions are on the run.  Should be an epic Season 4. I can't wait for October!

SPOILERS OVER (IT'S SAFE TO GO BACK TO READING)

There you have it, my A to Z and my Walking Dead round up. Did everyone have a good weekend?
Posted by Unknown at 2:00 AM