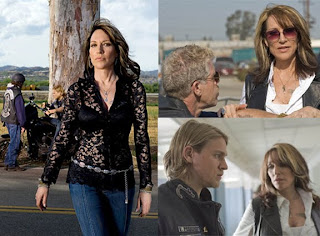 It's time to get back to my ladies, the television badass bitches. And to me there are no bigger bitches than Gemma Teller-Morrow on Sons of Anarchy. If you do not watch this show, start right now, this minute. It is Hamlet meets Hell's Angels and all the twists, turns, back stabs and shootouts in between. You'll find it on F/X on Tuesday nights @9PM CST.

Gemma is played to perfection by the amazing Katy Sagal. Peg Bundy no longer lives here, let me tell you. I should hate this show because it is so misogynistic at times, but with a female lead like Gemma, it's impossible. This characters is one of the strongest and smartest written for a woman on television. Gemma is the matriarch and queen bitch of SAMCRO (Sons of Anarchy Motorcycle Club Redwood Original). Her husband, Clay Morrow, is the president and a founding member while her son, Jax Teller, is the heir to the club. She is beloved by all the club members and she rules them with equal parts love and iron-fisted ass kicking. To Gemma there is nothing more important than her family and the club. She will do anything, I mean we're talking anything, to protect them, even from themselves. 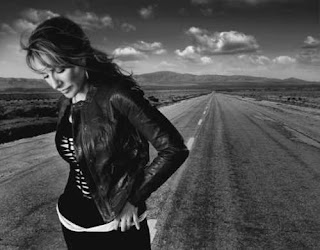 The Lowdown on Gemma

She's got a killer 'tude and a mouth that would make a hardened prisoner blush. Gemma pulls no punches, she delivers them blow after blow. She takes scheming to new lows, a brilliant strategist who sizes people up accurately in a millisecond. Her tongue cuts fast and deep, making hulking bikers and racist drug dealers go slinking away, testicles in hand. She's not afraid to pull a gun when necessary and do things like shoot up a porn star's car or threaten an ATF agent. She'll even knock a bitch out with a skateboard. There's nothing she can't handle and acts as cleaning crew when her men have fucked up. Gemma even finds time to run community service projects for the town of Charming. Bet your Homeowners Association President was never like her.

"You should have thought of that before your dick went on a cheerleader hunt."

"Nobody gets in the way of me taking care of my family. Especially my conscience."