I am an ardent feminist, Girl Power to the core. If there's a rally for women somewhere, I'll be there or be writing about it. Here, I often write of strong women and badass bitches I love in television and on film. Women who kick ass and take no prisoners. Today I am taking some time to honor three of the strongest women in this world. Their courage and fortitude humbles me and simply cannot be measured. Tawakul Karman, Leymah Gwobee and Ellen Johnson Sirleaf were selected to be the recipients of this year's Nobel Peace Prize. They have worked tirelessly in their countries for the rights of women, risking their very lives to blaze a trail into the darkness of oppression that shines with the power of a thousand spotlights.

Words cannot express the profound joy I feel at seeing these three women from two nations known for their ruthless suppressive governments, receive one of the greatest awards in the world. 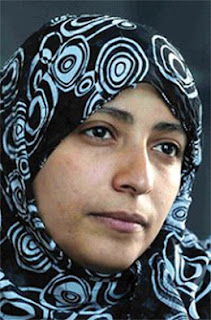 Tawakul Karman is a Muslim woman who has risen to become the face of Yemen's pro-democracy movement. She has been honored as the "Mother of Yemen's Revolution" and holds a position on the central committee of her country's Islah (Reform) Party. Something that was unheard of just a few years ago. Although she helped kick things off with the Day of Rage on February 3 of this year, the truth is she had been working tirelessly the year before holding protests at the Girl's College of Sana'a University for the rights and freedoms of women. Since 2007 she has led demonstrations against censorship and the right to create a free radio station. These demonstrations were often met with violence, yet she never waivered and now the Yemeni people stand on the precipice of taking back their country from its oppressive rulers. Sahar Tarman has a wonderful article about Tawakul here. 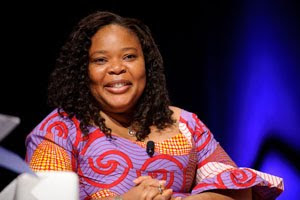 Leymah Gwobee began her activism in a fish market outside Liberia's capital of Monrovia nine years ago. It was there that she, along with thousands of Liberian women began to make their voices heard. They dressed in white and sat, singing and praying within earshot of the dictator, Charles Taylor. Rain or shine, they stayed, protesting the 14 years of war their country had endured. In 2003 she led hundreds of women to Monrovia's city hall demanding an end to the violence. When at last they confronted Taylor and the other warring factions, the Accra Peace accord was signed. She now serves on Liberia's Truth and Reconciliation Commission and is executive director of Women in Peace and Security Network, an organization that works with women in Liberia Nigeria, Sierra Leone and Ivory Coast. Tamasin Ford has a great article here in the Guardian profiling Gwobee. 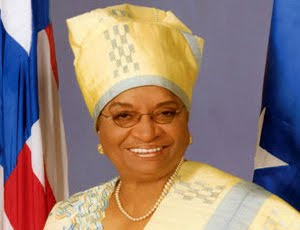 Ellen Johnson Sirleaf is the first democratically elected woman to lead the nation of Liberia and the first female Head of State on the continent of Africa. At 17 she had been married to James Sirleaf, who brought her to the United States in 1961. Here she studied economics, receiving an eventual Masters from Harvard in Public Administration. She returned to Liberia where she served as Assistant Minister of Finance and Minister of Finance under William Tolbert. She survived a brutal coup which took the life of Tolbert and fled her country in November 1980. After working for the World Bank, Citibank and HSBC throughout the 80's and early 90's, she was appointed to the United Nations Development Programme where she served as assistant, then as director of the Regional Bureau for Africa. In 1999 she was appointed by the Organization for African Unity as part of a prominent team to investigate the Rwandan genocide. She became President of Liberia in 2005 and in 2006 created the Truth and Reconciliation Commission to investigate the brutal crimes carried out during Liberia's Civil War. The New York Times has a great profile of her here.
Posted by Unknown at 9:41 AM