LOL, love that title? It's Halloween and not only is it time for scary movies, monsters, serial killers and of course Trick R Treating, it's also time for ghosts. Chicago is one hell of a haunted town. We have so many ghosts running around, we're also known as Undead Central. Our ghosts even vote. Just ask former Mayor Daley. ;)

Before I get started with my post, let me share my You Should Know person for this week. Because it's Halloween and his blog centers around zombies, I think you should get to know Jeremy at iZombieLover.

Jeremy is a talented graphic artist with a hellagood, slightly skewed sense of humor. His artwork is incredible. It's creepy, it's intense and it's definitely unique. He'll turn you into a zombie, too, if you dare...Imagine that Christmas card going out to family. As if being an incredible artist isn't creative enough, the guy is also an amazing writer with a graphic novel out called Chatterbox.

Now on to my ghostly post. We have some very cool haunted places here in Chicago and places that are just plain notorious and infamous for grisly happenings. These sites have been known to have some residual spiritual activity or outright ghosts and phantoms. I've had some eerie encounters at these places and no, not full-bodied ghosts and stuff, but things. Here's a couple that creeped the hell out of me and made me want my mommy.

Mt. Carmel Cemetery is located in suburban Hillside, not far from Queen of Heaven where my grandparents are buried. This is where Julia Buccola Petta, the Italian Bride, has her permanent resting place. Julia died in childbirth in 1921 and within a few months her mother began having dreams that her daughter was still amongst the living and needed her help. For six years the dreams continued and in all that time, her mother tried to get Julia's grave opened. Finally, she succeeded and when the coffin was exhumed and opened, Julia's body was found to be entirely in tact, no decay whatsoever. Take a gander. 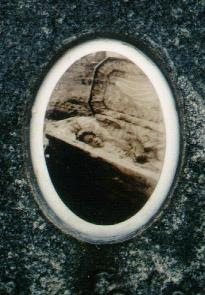 The picture was taken when they opened her casket and you can see the perfect condition of her body while the coffin is muddy and looks the worse for wear. Now, they say you see a woman in white near her grave, but I didn't see anything when I was there with my friends. HOWEVER, I did feel something when I got a few feet from her grave. Something took my right hand. Seriously. It was like someone slipped their hand in mine, but it was as if that hand were made of ice. I sucked in all the oxygen around me in a slow, hard breath. Every hair was on end. Now granted it was winter, but I had my gloves on and it was only my right hand. I choose to believe that I had a haunted encounter and you won't convince me otherwise anytime soon. 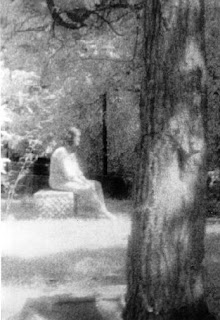 Another time, I attempted to go into Bachelor Grove, one of the most haunted cemeteries in America. The activity here ranges from mysterious balls of light to disappearing car and a strange woman. The picture at the left is purported Madonna of Bachelor Grove. She's been photographed dozens of times over the decades. A few years ago I went by myself, during the day, of course, to see what I could see. I never made it past the No Trespassing sign as dread froze me in my tracks. I tried walking, but my legs would not move. I was overwhelmed with fear. I don't know how long I stood there until I was able to run back to the car. I am planning to go with some friends this time and we'll see what we see. Call me a nut job, but I want to face this dread and see if I encounter anything inside the place.
Posted by Unknown at 11:24 PM