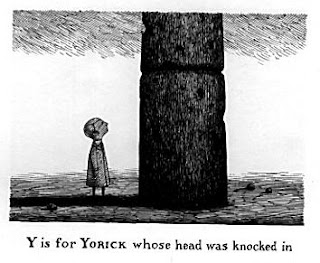 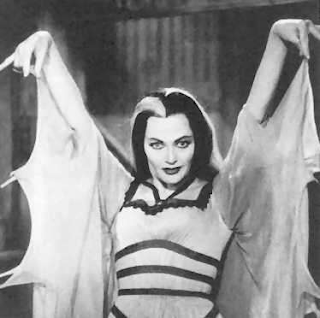 Oh My, I've made it to Y and alas, poor Yorick is about to have his head bashed. But, on with the Challenge as promised. My selection for Y is the incomparable Yvonne De Carlo, known to all as one Lily Munster. She and Carolyn Jones aka Morticia Addams, are the two TV moms that had the most influence on my childhood. My friends all wanted Carol Brady, not me. Give me the wife of Frankenstein's monster and the proud daughter of the most lovable vampire ever. Sorry Edward, Grandpa Munster's got you by the short and curlies. He's not only a vampire, but a mad scientist. Take that!

Though Yvonne is best remembered as the feisty Lily, she had an extensive film career. She appeared alongside some of Hollywood's biggest icons like Charlton Heston, Clark Gable, John Wayne, Burt Lancaster, Sidney Poitier and Alec Guinness. Her filmography includes The Ten Commandments, McLintock!, Criss Cross, The Captain's Paradise and Band of Angels.

During WWII, she worked tirelessly to boost troop morale and was a favorite among the soldiers, sailors and marines. She sang beautifully and had a powerful contralto voice. Movie composer John Williams arranged the music for her self-titled 1957 album. 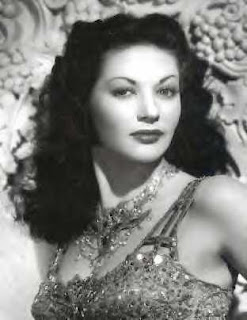 Her television career was lengthy as well, having guest starred in shows like Bonanza and The Virginian. In the 90's she appeared in one of my favorites, Tales From The Crypt. She is an icon in the world of horror, too, for her work on films like The Power, Sorority House Murders and Cellar Dweller.

For all her work, Yvonne was awarded not one, but two stars on the Hollywood Walk of Fame. One at 6124 Hollywood Blvd for her work in film and another at 6715 Hollywood Blvd. for her contribution to television.

Labels: A to Z, A to Z Challenge, about Melissa, Yvonne De Carlo