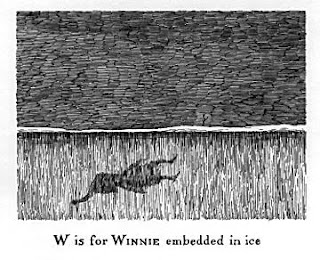 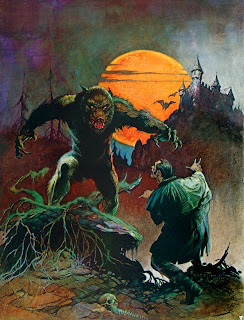 Did you think W would be any other? Come on, this is me we're talking about. I love, love me the werewolves. They are my favorite monsters of all time, sexy beasts with no equal in my heart of hearts. To tell you how bad I have it for the wolves, I begged Santa for Eddie Munster's werewolf doll, Woof-Woof. It's all thanks to Lon Chaney, Jr. and local TV horror icon Son of Svengoolie. They were my first werewolf experience.

I've seen troves werewolf movies, from the sublime-blow-your-mind-wow to the supremely ridiculous crap that features no werewolf at all. You know the type, some bubble gum snapping intern throws fake blood on the lens, while another growls off camera and the actor screams and yells while more fake blood is being thrown on them. Whoo effing Hoo.

Now, as with all monster movies there is Good Shit, Bad Shit, Campy Shit and Shit To Avoid At All Costs. Here's the criteria for werewolves:

1. The Transformation - If there is no badass transformation, things are going south no matter how good the plot is. I mean, the whole freaking point of watching a werewolf movie is that monster. The two best werewolf transformation scenes ever, in the history of werewolf flicks are 1981's The Howling and An American Werewolf in London. No CGI has ever, and I mean never ever, been able to equal the masters Rob Bottin and Rick Baker.

This is the link for Rob Bottin's Howling scene. The embed codes have all been disabled much to my screaming frustration. This is the best werewolf transformation scene ever.

Here is Rick Baker's work from An American Werewolf in London. It is second only to Bottin's work.


And here is the final result with a righteous kill shot. 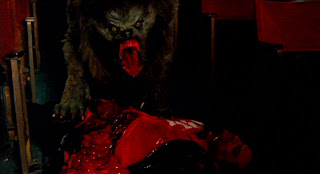 2. The Monster - Once you have a kick ass transformation, you need an excellent monster. Again, the whole point of a werewolf movie is the creature. Here's a good one from Ginger Snaps, a rockin awesome female werewolf trilogy. 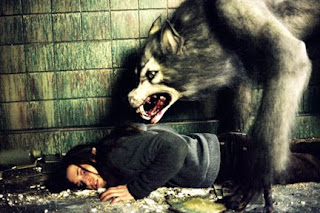 3. The Kill Factor - This is part of the whole fun of werewolf movies. Watching these furry bastards claw and chew their way through a variety of victims. I give you Eddie Quist (Robert Picardo) from The Howling about to take a bite out of poor Terry (Belinda Balaski) 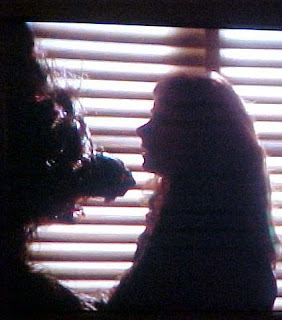 Now that I prepped you on what to look for in a werewolf movie, here are some examples in my various categories.

An American Werewolf in London (1981)


Bad Shit Werewolf movies that are just dumb but they're all right if nothing else is on. Pretty good monsters, too.

Campy Shit Werewolf movies that are not great stories, but are pure bloody fun

Shit To Avoid At All Costs These are so effing bad, I can't even begin rationalize how they got put into production. In other words Supremely Ridiculous Crap.

The Beast of Bray Road (2005) The monster here looks like a shag rug with teeth. 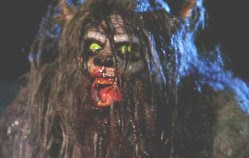 She-wolf of London (1946) There is no monster period, just a woman covering her face and men screaming. Sounds like a blind date to me.

All the subsequent Howlings: Howling 2:Stirba, Werewolf Bitch, Howling III, IV, V... and it just spirals down into a morass of stupidity and gratuitous nudity. The werewolves are actors with Halloween masks purchased from Wal-Mart. And that's when these movies even bother to have a monster. Mostly they're the interns with buckets of fake blood.

Hope you enjoyed my little Werewolf Movies 101. Now go out and enjoy the day and thanks for sticking with me through the rest of this A to Z. We're almost there.
Posted by Unknown at 10:40 AM

Labels: A to Z, A to Z Challenge, about Melissa, werewolves