Movies I Hate & Wish I'd Never Paid To See Part 3

Here we are at Number Three. I can't believe how many films I've lambasted this week so far. But I love the movies and there is no greater crime than paying to see one that is so bad. That's what cable TV is for. Today's selection, Numero Tres, is a godawful piece of tripe that really ruins the memory of certain historic events. 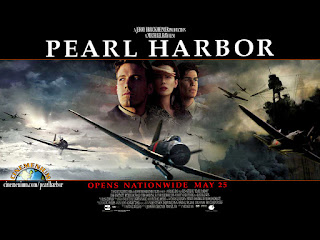 Or How Michael Bay figured out how to cram as many cliches and tropes as possible into one film and still have billions of explosions. What we have is not one film, but three. There's the Battle of Britain, Pearl Harbor and Doolittle's Raid, none of which received the attention they deserved. Then we have this cliche to the core, chewy gooey love story.

Let me count the conventions here and I encourage you to check the plot summary to make sure I haven't missed something. One, best friends fall for same girl. Two, the friend who wins her gets killed. Three, the girl and surviving friend fall for one another and make beautiful luurve. Four, dead friend comes back right before big attack. Five, girl finds out she's preggers with friend's kid. Six, best buds fight, make up, then go on secret mission where father friend is killed. Seven, Lazarus returns to the woman and they raise the kid together, naming him after dead friend. Eight, and they all lived happily ever after. It's a drinking game, I tell you.

Furthermore, there wasn't an ounce of chemistry to be had among our three main characters to make this bullshit easier to swallow. Their manners and delivery were stiffer than frost covered grass and more awkward than a lumbering walrus. I found myself laughing uproariously during those painful, so-called love scenes. And someone please tell me what the eff was up with Josh and Kate banging in the parachutes? It was like watching shadow puppet theater. I pictured Pinnochio singing "I got no strings to hold me down..."

Man, every time I think about the fact that I paid to see this load of crap, I want to pluck out my eyes with tweezers. I even had margaritas before I saw this and not even good tequila could make this mess look good.
Posted by Unknown at 9:46 PM