Movies I Hate &Wish I'd Never Paid To See Part 2

Since we're talking bad movies today, check out my review for The Rite. It's not pretty, just like this movie here.

Yes, it's time for another addition to my infamous hit list. Today's entry is straight out of WTF land. 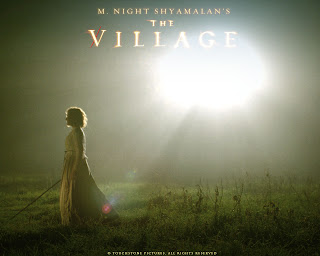 This is one of the worst celluloid crimes ever perpetrated on humanity. A story one thinks up after downing a cocktail of liquid cold medicine and vodka followed by an Alaska-sized bong chaser.

I want to change my name and flee to parts unknown whenever I think about the fact that I actually paid to see this. Man, I just bent right the hell over for this giant screw of a movie.

People who couldn't handle their real lives, set up a utopian village in the middle of a rich guy's estate. Seriously? Then, they erect a wall around their little colonial resort, telling their kids horrible monsters will eat them if they go beyond the boundaries. Are you effing kidding me? And apparently this guy is so rich, he pays the FAA to keep planes from flying over the village so the kids will think it really is 200 years ago. Oh. My. Freaking. GOD!!!

Then we have the scintillating performances of Bryce Dallas Howard, Joaquin Phoenix, Adrien Brody, William Hurt and Sigourney Weaver. Oscar winners and nominees. Apparently all the King's men and all the King's horses could not make M. Night's movie believable.

Talk about stoopid to the Tenth Power and yes, I did spell it with two O's. That's how fucktarded this movie is and how unintelligent I was for paying to see it.
Posted by Unknown at 10:58 PM