C Is For Edith Cavell 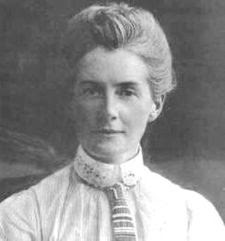 * A Note: I am in the midst of getting ready to move, so if I don't get to respond to the comments on here right away, I am very sorry. Please forgive the late responses.

Nurses are the most awesome people and one of the best, most courageous in my book is Edith Cavell. She stood firmly in her belief in helping others and never wavered. The daughter of an Anglican minister, she was always helping those less fortunate. Her call to nursing came later in life, a second career you might say. She entered the profession in 1905 at the age of forty and she took off from there. By 1907 she was the head of a newly established nursing school L'École Belge d’Infirmières Diplômées in Brussels. In 1910, she launched the nursing journal, L'infirmière. Just one year later, Edith was the training nurse for three hospitals, twenty-four schools and thirteen kindergartens.

World War I broke out in 1914, while Edith was home in England. She immediately headed back to Belgium. Here is where her courage and her unwavering belief in helping others rose to the fore and carried her into history. During the German occupation of Belgium, Edith gained a reputation for helping soldiers of both sides. It was during this time that she began helping Belgian soldiers trapped behind German lines to escape into The Netherlands, a neutral country at the time. She had been recruited by British SIS, but turned from her espionage activities in order to help soldiers escape. She helped some 200 soldiers before coming under suspicion by the German High Command. On August 3, 1915, she was arrested and sent to St. Gilles prison. She was held there for 10 weeks as she was court-martialled under German military law. A death sentence was handed down and in spite of massive protests, on October12, 1915 at 6:00AM, the sentence was carried out. Edith was executed by firing squad along with one of the men who helped her with the soldiers, Philippe Bauq, a Belgian architect.

Edith went to her death bravely, saying to Reverend Stirling Gahan, "Patriotism is not enough, I must have no hatred or bitterness towards anyone." The international furor over her death was enormous and she was used in many propaganda campaigns during the rest of the war. Many memorials were established in her honor, but one of the coolest comes from Canada. Mount Edith Cavell stands near Athabasca Pass in Jasper National Park in the Canadian Rockies. They named a mountain after her, how impressive is that?

One of the world's first novels, The Tale Genji, was written by a Japanese noblewoman, Murasaki Shikibu in 1000 AD.

Thanks for stopping by during this awesome challenge. Please visit the other awesome participants by clicking here.

Labels: A to Z, about Melissa, strong women