X Is For Xie Jun

It's Friday and it's X day. No not Triple X Day, although...Ahem. I'll just save those thoughts for my next salacious tale. ;D Okay, mind out of the smut bag and back to the challenge. 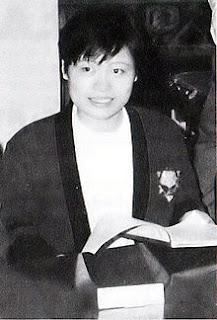 My X is for Xie Jun, chess grandmaster. She learned to play xiangqi or Chinese chess at age 6 and by 10 was the girl's champion of Beijing. When the government learned of Jun's facility for xiangqi, they encouraged her to take up the international game of chess. In spite of her lack of real training opportunities, by age 14 she was the Chinese girls' champion and in 1988 tied for the fourth at the women's world junior championships.

In 1991, Xie became only the second chess grandmaster from China. That same year she defeated 13 time world champion Maya Chiburdanidze of Georgia. Jun was just 20 years old. She went on to reign as world champion until 1996, but became champion once more in 1999 and defended that title successfully until 2001.

Xie Jun's popularity amongst her countrymen has contributed to the popularity of chess throughout China and the rest of Asia. She remained in the top three of female chess players throughout her international career. Today, she holds a doctorate in psychology and works with athletes as well as chess players.

In 2004, Xie was tapped by FIDE, the international governing body of chess, to be an International Arbiter. Th requirements for this awarded title are very stringent and she is only one of a handful of women to have been awarded this title.

I appreciate the visit today and hope you enjoyed learning about Xie Jun. To visit the other brilliant A to Z challengers, please click here.
Posted by Unknown at 4:24 AM