H Is For Dolores Huerta 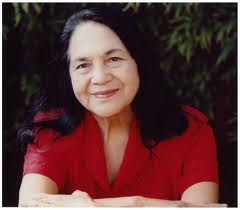 Growing up on the South Side of Chicago, I was born into a union family. United Steel Workers was part and parcel of my childhood. How could I not choose a female labor leader for my A to Z list. I want to introduce you to Dolores Huerta, co-founder of United Farm Workers and a woman I admire greatly for her tireless work on behalf of the working poor, women and children.

Dolores was born in the mining town of Dawson, New Mexico and after her parents divorced, she moved to Stockton, California. She experienced activism from an early age through both of her parents. Her upbringing and early community work led her to a teaching career, which she left in 1955 because she knew she had a different calling. Huerta helped found the Stockton chapter of the CSO (Community Service Organization) not long after leaving her teaching position and in 1960 co-founded the Agricultural Workers Association. This organization helped set up voter registration and presses for barrio improvements.

Through this work she met Cesar Chavez. In 1962 they founded the National Farm Workers Association, which would later become United Farm Workers when they combined their organization with Larry Itliong's Agricultural Workers Organizing Committee. In 1966 she successfully negotiated a contract between UFW and the Schenley Wine Company, making this the first time that agricultural workers were able to bargain with an agricultural enterprise.

An activist and political leader, Dolores was drawing national attention. She stood with Robert F. Kennedy on that fateful June day in 1968 at the Ambassador Hotel and was mere yards away when he was shot. Her work has also been fraught with struggle. She has been arrested some 22 times for her protests and in September of 1988, she was severely beaten by San Francisco Police at a protest rally against then presidential candidate George Bush the Elder. The beating was caught on tape and Huerta won a large judgment against the SFPD. She used the money to aid farm workers. Following her recovery, she took a leave of absence from the union to concentrate on women's rights and worked to get more Latina women registered to vote.

Dolores has also received many accolades for her tireless work. In 1997 she was named one of the year's three most powerful women by Ms. Magazine. The next year she was the inaugural recipient of the Eleanor Roosevelt Award For Human Rights and Ladies' Home Journal recognized her as one of the Most Powerful Women of the Twentieth Century alongside such leaders as Mother Theresa and Indira Ghandi. In 2007, she was the co-recipient of the Community of Christ International Peace Award and in 2008 was awarded the Jane Addams Distinguished Leadership Award from United Neighborhood Centers of America.

At 81, she still continues to tirelessly campaign on behalf of the working poor and women. She created the Dolores Huerta Foundation in 2002 which helps grassroots organizations in poor communities, helping them develop leadership and policy advocacy strategies.

Dolores just blows me away. I should have a tenth of that drive and ambition at my age.

She has five elementary schools named for her. Four in California and one in Texas.

In the midst of all her political activism, Dolores also managed to birth eleven children and marry twice. 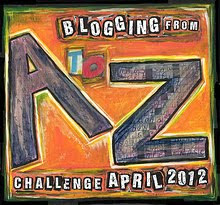 Thank you so much for stopping by today. I appreciate your visit. If you're participating in the big A to Z, click here to find more awesome participants.
Posted by Unknown at 4:34 AM