W Is For Sheila Widnall

Happy Thursday and Happy W Day to all my fellow A to Z challengers. We're getting to the end of big blogfest and I could not be more happy, exhausted, stressed and excited. What an awesome experience this has been so far. 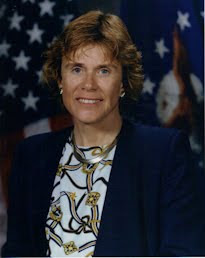 W is for Sheila E. Widnall, engineer, scientist, teacher and trailblazer. She was one of only 23 women in the freshman class of 936 at MIT in the fall of 1956. After graduating with her BS in 1960, she earned her MS in '61 and her Sc.D in aeronautics and astronautics in 1964. Not long after, she was appointed Assistant Professor at MIT. Sheila is known for her work in the field of fluid dynamics, studying aircraft turbulence and the spiraling vortices created by helicopter blades.

Sheila served as the Chair of Faculty for MIT's School of Engineering from 1979-81 and served as Associate Provost from 1991-93. In 1988, she was elected to serve as President of the American Association for the Advancement of Science. During this time, Sheila also served on the Board of Visitors for the United States Air Force and on  the advisory committees for Military Airlift Command and Wright-Patterson Air Force Base. One of her most awesome achievements came on August 5, 1993, when she was appointed Secretary of the U.S. Air Force. She became the first woman to ever head a branch of the military.

Her achievements continued from there. In 1995, she was elected to the National Academy of Engineering and served as its vice-president from 1998 to 2005. She also won its distinguished Arthur M. Bueche  Award in 2009. Her expertise  and experience also lead to her appointment to the shuttle Columbia accident investigation board in 2003. Currently Sheila works with the Lean Advancement Initiative at MIT.

I appreciate your visit today. If you want to visit the other challengers from the big A to Z, please click here.