It's the final day of the awesome huge A to Z Challenge 2012 and I cannot believe I finished on time and in spite of moving, starting a new job assignment and dealing with some dramarama. I feel like a champion! I still have some comments to respond to as I've had a huge weekend filled with First Communion, chores, errands, and whole host of other things, but I will respond. Congrats to all my fellow challengers out there. We did it!! And huge thanks to Alex, Lee, Tina, Jenny, Damyanti, Stephen, Kostanz, Matthew, D.L., Elizabeth, Sharon, Jeremy and Karen for doing such a kick ass job co-hosting this mighty blogfest. 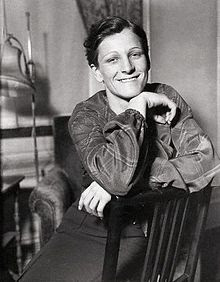 For my final strong woman you should know, Z is for Mildred "Babe" Didrickson Zaharias, one of the greatest all around athletes the United States has ever known. At a time when women in sports was generally frowned upon, she pursued athletic excellence. Babe's specialty areas were golf, basketball and track and field. In basketball she was an All-American and in track won three Olympic medals at the 1932 Los Angeles Games, two gold and one silver. Prior to her appearance in the Olympic Games, Babe set five world records at the Amateur Athletic Union championships in the 80 meter hurdles, the javelin throw, the high jump and the baseball throw in a single afternoon of competition. She was the only female member of her AAU team. the Golden Cyclones.

Her post-Olympic career included organizing and touring with a Harlem Globetrotters-esque team called Babe Didrickson's All-Americans. But golf was her game and the sport for which she would become the most famous. She came to it rather late (1935), but she excelled quickly. She was denied amateur status to play in the female competitions because of the money she had made after the Olympics with her basketball touring. There were only a handful professional female competitions, so in January of 1938, Babe competed in the Los Angeles Open, a men's PGA tournament. She just missed the cut that year, shooting an 81 and 84. She continued to pursue the PGA as her prowess grew and would qualify for the tour in 1945, the first and only woman to ever do so. No woman would attempt such a feat again until Annika Sorenstam, Michele Wie and Suzy Whaley six decades later.

After earning back her amateur status, Babe won both the U.S. Women's Amateur and British Ladies Amateur in 1946 and 47, the first American to do so. In 1950, she helped found the LPGA and went on to capture 41 tour wins from 1950-56. Her golf career was cut short when she lost her battle with colon cancer in 1956.She was still a top ranked player at the time of her death.

Thank you all so much for stopping by and support me throughout this entire A to Z. Your supportive, enthusiastic comments have humbled me and made me smile a lot during one of the most stressful times for me. To visit my fellow awesome challengers on this finale day, please click here.
Posted by Unknown at 4:28 AM