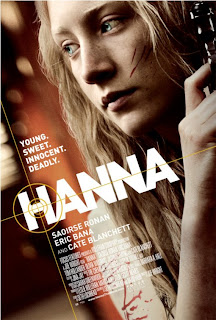 Yes, I finally, FINALLY watched Hanna with my friend and her daughter. I know it's only been out on DVD for a million years or so, but I'm putting in my two cents worth anyway. We LOVED this movie! And I was slap-happy to see a young movie heroine worthy of being called a heroine. My friend and I believe that Hanna actually broke G's heretofore disturbing fascination with Bella Swan. She said to me after the movie that she liked how Hanna saved herself and did her own butt-kicking because Bella always lets Edward and Jacob do it for her. How's that for pre-teen logic? It brought a tear to this ardent feminist's eye, I tell you.

From opening sequence to final credit roll, Hanna was an ace flick. Saoirse Ronan is seriously freakin' talented. She rocked it as Hanna Heller, a girl who is the sole survivor of a CIA experiment and raised in the deep woods of Finland by her father to be a multi-lingual assassin. Hanna is intelligent, quick-thinking, fast on her feet and hellagood with weapons. She made me think of a cross between two of Joss Whedon's most famous badass bitches, Buffy and Zoe. If I were the parent of a young girl, Hanna would definitely be a character I would want her to like and pretend to be while at play.

This movie is one hell of a rush, too. There are very few slow parts and these serve as an intriguing counterpoint to all the breath-stealing action. Here we get to know Hanna and watch her figure out how to grow up. I loved the family she hooked up with. Olivia Williams and Jason Flemyng are superb as Rachel and Sebastien, a couple on a road trip with their two kids. Jessica Barden plays their daughter, Sophie. She is wise-cracking with attitude to spare and helps Hanna navigate the realm of teenagers. I just have to say that I think it is awesome that Hanna's first kiss comes with Sophie and not with the two boys they had hooked up with. G asked her mom and me if girls could kiss other girls like that for real and our answer was a resounding yes they absolutely can. And boys can kiss boys, too. 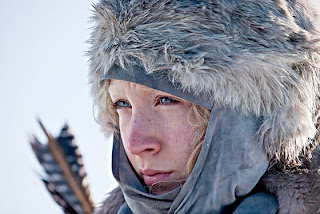 Cate Blanchett creates a whole new level of bitch in this film as Marissa Weigler, the CIA agent who oversaw the experimental medical program that Hanna's mother had belonged to. She has no hesitation in killing anyone who gets in her way and screws people over left and right, lying and using whatever means necessary to get what she wants. And in this case that is Hanna and her father dead. Eric Bana shows another side of his talent as the scientist, Erik Heller, who tried to right a serious wrong by helping Hanna's mother escape, then raising her daughter to have mad survival skills.

Everything about this movie was fantastic. From the stellar characters and Joe Wright's fierce direction to the outstanding screenplay by David Farr and Seth Lochhead, Hanna is an epic film. For G and all the little girls and teens out there like her, we need more girl-centric action films like this. I am so sick of movies that highlight boys and their adventures with girls, if they appear at all, relegated to playing sidekick or, gag me, love interest. I want a sequel to Hanna. :)

Haywire, Haywire, Haywire...Only 8 more weeks until Gina Carano stars as a black ops super soldier out for revenge. Until then, here's to my badass bitches out there and more books and movies about them.