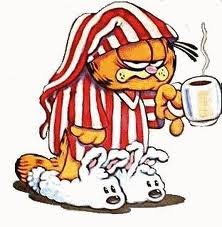 Ugh! It's Monday and I'm already having a bad week just thinking about the shit I have to do this week. I want to turn the clock back to Friday. I hate when the week just starts and already my blood pressure is hopping. Stop the ride, I want to get off...NOW!!

Okay, bitch session is over. It's not all bad, honestly, I'm just whining because that's the way I roll sometimes. And what better day to bitch, than Monday?

Anyway, I watched Walking Dead last night and saw the coolest zombie kill ever. It was gross and hilarious all at once. My favorite kind, really. Picture water-logged zombie and immense dead organ spillage. I have got find the clip and post it. I nearly peed myself laughing. Yep, I'm just that twisted.

I also watched Hell on Wheels. Great is an underwhelming adjective to even begin describing this show. It is savage, visceral television. The production is just mind-blowing. I could almost smell the filth, the animals and the people. Whoever it was that said the Old West was romantic obviously had no clue what they were talking about. Uh can we say "Ewwwww..." That being said, this show absolutely captures that brutal period known as Reconstruction. Carpetbaggers, corrupt politicians, Native Americans, freed slaves, greedy tycoons, gunslingers, families wanting to start fresh, ex-soldiers, prostitutes and preachers all in a roiling, seething mass of expansion and rebuilding. What a savage period to have lived through. The U.S. had blown itself apart in civil war, the social order was in complete upheaval, the president had been murdered and we were building one of the country's greatest infrastructure projects. Not a period for family values that's for sure.

The characters are incredible, the Good, the Bad and the Ugly, each with their own agenda. Colm Meaney is wickedly brilliant as Thomas "Doc" Durant, a greedy railroad man who is hellbent on building the transcontinental railroad, but also just as relentless in wringing as much money from the process as possible. Anyone who stands in his way is brutally run down. Anson Mount is intense as Cullen Bohannen, an ex-Confederate bent on revenging his wife's murder. A far, far superior cry from Brit Brit's love interest in that godawful Crossroads. Chitown's own Common is incredibly brilliant as Elam, a former slave working the line and determined that no man will ever own him again. Check the trailer and tune in for sure.