Imaginarians, I am dancing with excitement because the amazingly talented Jessica Bell is spending some time here with us on her whirlwind tour for her debut novel String Bridge.

String Bridge tells the story of Australian musician Melody, who married a Greek music promoter and settled in. Eager to make her new life work, she gives up her music for a proper career and eventually, motherhood. Unable to bear what she's become, Melody makes plans to return to life on the stage and the person she once was. However, the obstacle mount and tragedy unfolds, leaving Melody to wonder if she's been looking for fulfillment in the wrong place. You can read the official blurb here.

If you're not already familiar with Jessica via her spectacular blog, The Alliterative Allomorph, here's a little bit more about her. She is a literary women's fiction author, poet and singer/songwriter who grew up in Melbourne, Australia, to two gothic rock musicians who had successful independent careers during the '80s and early '90s.

She spent much of her childhood travelling to and from Australia to Europe, experiencing two entirely different worlds, yet feeling equally at home in both environments. She currently lives in Athens, Greece and works as a freelance writer/editor for English Language Teaching publishers worldwide, such as HarperCollins, Pearson Education and Macmillan Education.

In addition to String Bridge, Jessica has published a book of poetry called Twisted Velvet Chains. A full list of poems and short stories published in various anthologies and literary magazines can be found under Published Works & Awards, on her website.

From September 2012 Jessica will be hosting the Homeric Writers' Retreat & Workshop on the Greek island of Ithaca, home of Odysseus. 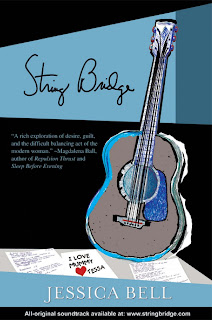 String Bridge is your debut novel. What was that moment like when you first found out it had been accepted for publication?

I really didn’t want to, seeing as it’s all I had been doing with every rejection, but I cried. It was one of the happiest moments of my life. I was ready to shelve the thing. I’d said to myself, “This is its last chance.” It really felt unbelievable.

What has surprised you the most about the business side of writing? Is there any part of publishing that you have found especially challenging?

The marketing, the networking. It takes just as much time, if not more, than writing does. I also don’t really enjoy tooting my own horn. I feel like I’m imposing myself on people. But I guess it’s something I’m going to have to get used to.

What will you take away from this experience and how do you think it will affect your future pursuits in publishing?

I will forever cherish the memory of all the support I’ve received from people like you. The launch of this book would seem useless without you! How will it affect the future? Well, it’s certainly changed my view of myself. I think I’ll stop doubting myself so often.

Do you write every day or only when inspiration strikes? How do you keep your creative juices flowing?

Only when inspiration strikes. I lose my flair when I push myself. But I love to write, so my breaks aren’t usually lengthy. I keep my creative juices flowing by writing poetry.

What message do you hope readers will take away from String Bridge?

I’m hoping readers will realize that there aren’t ever really any wrong choices in life, there are just different roads to follow. The challenge is to take a step back and figure out what is the most important to us before taking that leap in a new direction.

If we looked on your bookshelf right now, what are some of the titles we would find? 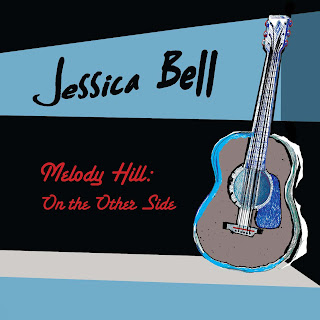 Writers receive advice from many sources along their journey. What was the best piece of writing advice you have received?

To be true to myself.

Aside from writing, what are some of your other passions and pursuits?

Reading, singing, playing guitar, cinema, travel, ancient history, making beaded jewellery (though I haven’t made any for quite a long time), learning how to enjoy physical exercise! (not quite succeeded yet)

If you were sitting in a room full of young girls who aspire to be writers and poets, what would you say to them?

Learn the rules and then break them intelligently!

That's some great advice. Thank you Jessica so much for being here. String Bridge debuts from Lucky Press, LLC. For more information go here and visit the amazing site Jessica has set up for novel. String Bridge is available for Kindle at Amazon and Amazon UK.

As if this book weren't amazing enough, she also wrote a soundtrack for the novel called Melody Hill: On The Other Side. You can check it out on iTunes, Amazon and Amazon UK.