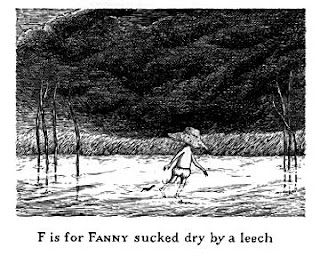 First, a little announcement: I'm making a blog tour appearance at Tess MacKall's blog today to promote my newest work, Byzantine Provocateur. Pretty please stop by if you get a chance and support yours truly, a friendly, if slightly demented, neighborhood starving writer. Thanks, you rock!

And now on with the challenge...

F Is For My Father 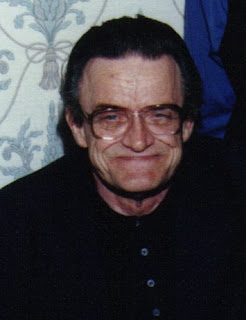 Reading several posts during this challenge has made me venture down memory lane and I've done some thinking about my father. He is probably the single biggest influence in my life. I get my skewed sense of humor from him, my love of all things sci fi and he was the one person who told me all the time that girls can do whatever the hell they wanted.

He watched monster movies with me on Saturday afternoons, his favorites being the creature features. We used to have our own running commentary on Godzilla and his various monster opponents. We used to watch The Munsters (my other dark humor show), and he would let me stay up extra late on Fridays to watch Son of Svengoolie, another show like Elvira's that used to be broadcast on a tiny local station.

He had a passion for space and he read science fiction voraciously. He loved the stuff as a kid and grew up watching Flash Gordon and all those fantastic 50's sci fi movies. Star gazing became his escape when he was on board ship during his stint in the Navy and Vietnam. I learned all the planets and local galaxies from him as we watched the night sky every summer. He loved Star Trek and Stars Wars, the first and only trilogy, was his absolute favorite. He piled us in the car and we waited in line for hours to see the first film.

He loved action movies and westerns. Clint Eastwood was his favorite and he taught me to appreciate one ultimate badass film, The Good, The Bad and The Ugly at a young age. I think I was in 8th grade or a freshman in high school. When the first Die Hard film came out, my dad got hooked on Bruce Willis. He wore out his VHS tape. He also became an avowed Sam L. Jackson fan. He loved badasses and I found later he was quite the badass before my mom.

He also encouraged me to write. Sure, we had titanic fights about just how I was supposed to accomplish this as he believed I should write on the side and have a secure, steady day job. I remember having to tell him that I had changed majors from business to English. He spluttered like his favorite cartoon character, Yosemite Sam. Man, was that ever a fight because I started going off and when I am mad, look out. But, bless his heart after raging around, we settled into accord and he was very proud when I finally got my degree.

Sadly, my dad lost his long battle with Emphysema nine years ago and never got to see me get published, but I like to think he's sitting up there with his friend Hank and drinking a Pepsi to me. Yeah, Pepsi, my dad had no tolerance for alcohol whatsoever. :)
Posted by Unknown at 5:43 AM

Labels: A to Z, my father, Patrick Bradley