Movies I Hate & Wish I'd Never Paid To See Part...Whatever 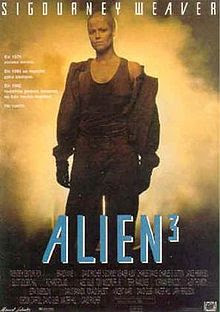 With all the hype surrounding David Fincher and his Girl With The Dragon Tattoo, as well as all the press he's received for The Social Network, it's time to break my 20 year vow of silence on perhaps the worst movie ever made in my opinion, Fincher's Alien 3. Where do I begin to describe the utter WTFery that is this movie? This film ruined what had been a sensational franchise, detonating it in one huge mushroom cloud of artsy, fartsy misguided nonsense, leaving Ripley dead and we the fans in a smoking wreckage from which we have never recovered. Hello, Alien Resurrection.

Who the hell thought it would be an awesome idea to have Fincher make his big-budget debut with this movie? Because yeah, making 80's music vids so qualified him to succeed James Cameron on a sci fi epic. To be fair, there were more script changes than winning lottery combinations. Why? What the hell was so hard? It's a fucking sci fi horror. You have alien monsters, people getting killed and a kick ass woman who takes them down. A simple, in-your-face formula that worked.

And it was fucked with it seven ways to Katmandu. Morphed into a weird, unrecognizable mess of shaved heads and psychotropic drugs. I went into this on a high reserved heretofore only for the original Star Wars sequels and well, Aliens. From the first frame, I wanted to put the beat down on Fincher and his producers, put their collective manly bits in a spice grinder. This was not my Ripley and not my ass-kicking sci fi movie. It was betrayal at the highest levels. Kill Hicks and Newt? Are you fucking kidding me? Set it on a prison planet? All right, we could go with that. But kill off Ellen Ripley? What exactly were they smoking/shooting up? And to think I paid top dollar on a midnight opening for this. Talk about How To Kill A Multi-million Dollar Franchise In 10 Frames Or Less.

Deep breath...I was spewing as I wrote this and had to do some serious editing. 20 years is a long time to keep rage inside. Maybe I can channel it into a story...Anyway, at least I can look forward to the return of Ridley Scott with his Alien prequel, Prometheus. And maybe a franchise can be reborn.