The Wearin' O' The Green 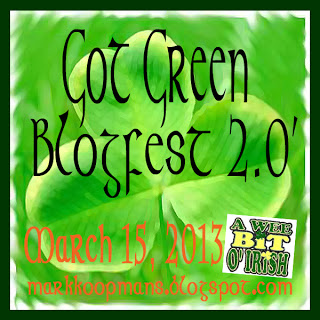 Happy Friday!! And it's St. Paddy's Day weekend to boot. Kicking things off, the awesome Mark Koopmans is hosting his Got Green? Blog Fest. To participate we share our Irish stories, real or imagined, in 333 words. Check out all the amazing participants here.


I'm Irish by way of Counties Cork and Tyrone, on both sides of my family. Bradley is the Anglicized version of O'Brollachain. My great grandfather Faye came here in 1900 from County Tyrone to work the coal mines, while on my mother's side, the Sullivans, hailed from Cork and worked the mills.

I’m  a South Side Chicago Irish woman, loud and proud. Being Chicago Irish is a far cry from being Irish anywhere else. We are a rough and tumble lot who literally grew up with our city. Chicago became a city in 1837 and we Irish arrived a scant decade later. We built the Union Stockyards, worked the steel mills, and built the Illinois and Michigan Canal. We had a hand in the building of the many bascule and draw bridges along the city’s rivers. South Side Irish backs laid much of the track for the railroads that helped make Chicago a commerce center. We were many of Chicago’s first firemen and police officers, Barney Cloonan and Martin Lahart were part of Elliott Ness’ Untouchables. We boast twelve mayors in our crew, the  Daleys being the most recent. Other colorful Irish politicians include “Hinky Dink” Kenna, “Foxy Ed” Cullerton and “Bathhouse John” Coughlin. We had a big influence on the spiritual side of things as well, our numbers making the Archdiocese of Chicago one of the largest and most powerful in the United States.

Our grand accomplishments weren’t always on the right side of the law, though. We made bathtub gin during Prohibition and ran speakeasies. And getting back to Al Capone, we gave him plenty of trouble on the illegal side of things as well. He tried to wipe out some of our North Side brethren in the infamous St. Valentine’s Day Massacre. 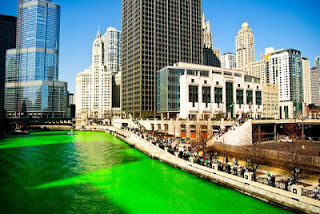 We celebrate St. Paddy’s day here like nowhere else. To honor our patron saint, we dye the Chicago River green, drink green beer, stuff our faces with corned beef, potatoes and soda bread. We kiss total strangers, lift our kilts and shake our tail feathers... Somehow, I don't think Patrick would get our party.

Fun Fact: It takes 40 pounds of dye to get the river that green

Well, I'm off to eat, drink and be merry, sing a few pub songs and dirty ditties. I'll probably even wear one of those grotesque Kiss Me I'm Irish buttons. On second thought...

Monday I will be here with my Top Ten Movies post for Alex J. Cavanaugh's brilliant blogfest.

Have a great weekend and Happy St. Patrick's Day!