This One's For The Girls: Happy Birthday, Title IX!

This Saturday, June 23rd, marks a special place in Women's history and my own personal one for that matter. It is the 40th anniversary of the passing of Title IX, which states:

No person in the United States shall, on the basis of sex, be excluded from participation in, be denied the benefits of, or be subjected to discrimination under any education program or activity

This original statute made no specific mention of high school and collegiate athletics, but its impact in this realm has been incalculable. Without it, hundreds of thousands of young female athletes would have had no chance. Before Title IX, women's sports programs were almost non-existent. Only 1 in 27 girls played any kind of varsity sport. Today that ratio is 1 in 2. As of 2008 there are 9,101 women's collegiate athletic teams and more than a million dollars awarded in athletic scholarship money in Division I schools.

It was authored by Senator Birch Bayh of Indiana as an amendment to the Higher Education Act of 1965. He stated "While the impact of this amendment would be far-reaching, it is not a panacea. It is, however, an important first step in the effort to provide for the women of America something that is rightfully theirs—an equal chance to attend the schools of their choice, to develop the skills they want, and to apply those skills with the knowledge that they will have a fair chance to secure the jobs of their choice with equal pay for equal work."

In forty years, my sisters have made tremendous strides. Here's to us. Pomegrante martinis all around!

Now, about that personal history I mentioned...

When I was born, Title IX did not exist, but thanks to its passage, I was able to join a softball league formed in my neighborhood. It was one of the first of its kind in Chicago, the East Side Girls Athletic Association. Below is a picture of my first team, the Debs. I was a catcher, a pitcher, right fielder and second baseman.We spawned three softball All Americans and four Illinois First Team High School All Stars. I wasn't one of them, but that's okay. Speaking of...There's yours truly down on the far right, second one in, hand over her face. So for my teammates Michelle, Sharon, Karen, Joy Ann, Nicole, Ginger, Tina, Lisa, Peggy, Chris, Darcy, Debbie and the three whose names escape me, Happy Birthday Title IX! 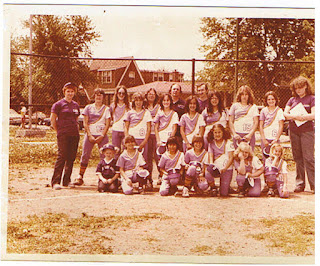