WTF, Mel, You Disappeared Again And A Blog Relay

I said I was back, then I went and left you all again. Jeez, Mel some friend you are. I hope you all haven't checked me off of your buddy lists just yet.

Anyway, my good friend Russell at 1:37 Exactly has passed along the baton to me (I don't have a pass to choice just yet) in a blog relay about the Ten Best Actors. I'm late with this post so I hope he forgives me. But, hey, I am short and chubby so the words relay and race are concepts my brain does not process very well. It's like I'm allergic.

So I am to check out the current list of Best All Time Actors chosen by the various participants, then agree to either leave the names as is or elect to remove someone, then add my own choice. Here's the list so far...

I passed the baton to Matt at FilmMattic, who removed Kevin Spacey and added Montgomery Clift. Go read his post, it is incredible.

So who am I removing from this list? Well, there are lots of great choices on here, but I'm going to have to take down Marcello Mastroianni as I am not too familiar with many of his performances and therefore cannot judge.

*UPDATE Apparently choosing Meryl Streep was in violation of the list rules so she had to go and I have to make another choice. So here HE is... 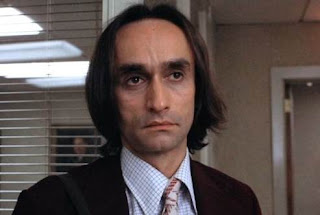 I'm adding John Cazale, the actor whom Pacino has said "All I ever wanted to do for the rest of my life was act with John." Meryl Streep, my original choice, said she learned "a great deal from John." He only made five films, but all five were nominated for Best Picture by the Academy. He even appeared in archival footage in The Godfather, Part III, which also was nominated for Best Picture, which technically makes a sixth film. Best known as Fredo in The Godfather films, John had a knack for finding the pain of each character and bringing it out, layer by layer, through humor, anger, resignation and a multitude of other emotions. He played the loser, the down and out guy trying to prove himself. I can't imagine anyone else playing Fredo, no one would understand Fredo to the degree that John did. I did a post last August in honor of what would have been John's 76th birthday. You can read it here.