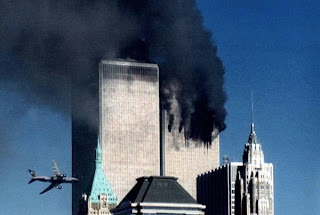 It's hard to imagine that it has been ten years since that horrible day, yet, time has marched on and while the wounds have scarred over, they are still very much with us. Each anniversary of this day that has come and gone over these last ten years had me torn between, "God, I am so sick of reliving everything over and over. Just stop" to watching every single news item, reliving every single moment in my mind's eye and praying.

I remember most of that day with a clarity that stuns me. And I was no where near New York City or Washington DC. I was here in Chicago and in my office at 300 W. Washington on the 21st floor, just three blocks north of the Sears, now Willis, Tower. I sat at my desk, opened my Diet Pepsi, then got into voice mail and started answering messages. It was just before 8:00AM Central Time and the first tower had been struck.

My co-worker Lisa came over to my desk, ghost white. "They think a plane crashed into the World Trade Center. There was an explosion."

"What?" In my mind I'm thinking a Cessna or some other small plane that had some engine trouble.

"They think it was a jet. There's a lot fire and smoke. We turned Good Morning America on because we had to adjust the picture on the new tv for the meeting later."

That brought me up short. "Holy shit!. Are you serious?" She nodded. Her blue eyes were so huge they looked like swimming pools. "We're all there watching, if you want to come on back. No one's here, really.." Our company had been having its annual conference so most of our office, at least all the bosses, were out in Las Vegas.

"Yeah. I've just got to finish up the consultant schedules."

"Okay." She left, but somehow I could not bring myself to do it. I grabbed my soda and headed to be with my co-workers. I walked in that room, just in time to see the second plane crash. All the oxygen was sucked from my lungs and I could not process what I had just seen live on tv. It reminded me horribly of that moment when I watched the Challenger explode fifteen years earlier. Everyone started exclaiming and crying. I dropped my soda and simply stared at the screen. I fumbled for a chair and sat down, my mind screaming "What the fuck?" over and over.

The next thing I remember, my friend was Teena handing me a napkin. I hadn't realized I was crying. I dabbed my eyes and continued to watch, ABC News had now taken over and Peter Jennings was the voice of reason to my scattered brain. The phone rang, making us all jump. Lisa answered and she started talking to one of our engineering consultants who happened to be in one of our member bakeries in New York. He said he didn't have long, but that he was going to extend his stay and try and rent a car because he didn't know if he'd be able to get out that night. They talked a while long, but I don't recall what was said because by this time the news that the Pentagon had been struck came across.

"Oh my God," another co-worker, Tom, exclaimed. "The Pentagon, too. I wonder how many planes were taken over? What other targets are there?"

Those words frightened me because we were right smack in the middle of downtown Chicago just up the street from America's tallest building. I ran to the window and looked out. I could just make out the top portion of the Sears Tower and my ears strained for the whine of a jet engine.

"Jesus Christ!" someone yelled, I spun back only to see a rumble of gray smoke and debris roll across the television screen. The South Tower had collapsed. I could not believe what I had just seen. It was weird and horrifying, like seeing a mass of red and slowly putting it together as blood stains.

Word came that a jet had crashed in Pennsylvania. We were starting to talk about that when a little while later the North Tower came down. I remember thinking with the rod on top, it looked like a collapsing birthday cake. A dumb thought, sure, but it was what ran through my brain at the time.

Talk started about other planes and other targets when we heard that the FAA had grounded all flights until further notice. But, they still could not account for four planes. A little while later, someone from the building manager's office came in and said that they were evacuating the entire Loop. I remember getting my stuff together and heading for the elevator. I was scared and wanted to take the stairs, but our building had people riding in the elevators with us and assuring us that this was the fastest way.

Outside was totally surreal. There was no noise at all. It was like the cemetery hush, magnified. All these people and cars, but no noise. I had a seven block walk to the train and I was terrified the whole time. I kept craning my neck, listening for a plane, yet trying to walk as fast as I could. I wanted my parents in the worst way.

The ride home on the train was a strange blur. I could not think, I could not concentrate on anything. My mind was just in a whirl. I got off my train and got on a bus. It was weird because instead of getting off the bus at the regular stop, I got off by old grammar school and walked that way to my parents' house. I had not walked that route since I was 14 and finishing 8th grade.

I stayed at my folks' house most of the rest of the day. My mom took me home later and I had a message from our company president, Bernie, saying to stay home and don't come in until Thursday morning. I watched the television all night and I recall that I went to bed right when the sun was starting to come over the horizon.