BOO!! It's All Hallow's Eve

At last, at last it's All Hallow's Eve, Halloween, Samhain for all my Celtic and Wiccan friends out there. Time for trick or treating, scary movies, haunted houses, ghost stories and fun with family and friends. So get your monster on and have a great time.

Samhain, pronounced 'sa uin, is the Celtic festival marking the end of the lighter half of the year and the beginning of the darker one. It also is a time to celebrate the dead, as certain Celtic traditions hold that the veil between this world and the next is at its thinnest, allowing the dead to cross back into the living world they once inhabited. It is the custom in some areas of Ireland and Scotlnd to set a place for the dead at the Samhain feast.

Bonfires played an important part, with people and their livestock walking between two fires as a purification ritual. With the bonfires lit, in some villages all other fires were extinguished, to be re-lit from these communal fires.

Samhain is also the Celtic New Year and divination was considered a primary part of the celebration. Seasonal foods, apples and nuts, were used to determine one's future spouse, state of marriage, how many children and location of future home. An apple was peeled and the peel tossed over the shoulder to see if the first letter of one's future spouse could be determined. Unsure about your marriage? Nuts were roasted in the the heart and their movements watched.If they stayed together,then so would the couple. Egg whites were dropped in a glass of water and the shapes interpreted to see the number of children a couple would have.

Masks were worn to ward off evil spirits. Masks would hide the identity of the living and keep them safe from the evil spirits that had crossed over. In Scotland, young men wore veiled or blackened faces and dressed in white to impersonate the dead. 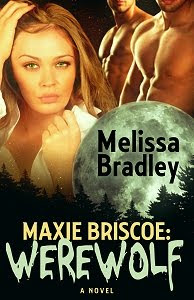 The name's Maxie Briscoe and I am a werewolf…

That’s right, a real live, full moon-loving, Halloween icon. It’s hard out here for girl like me. To survive, I hide my true self and act the part of a normal human, all while discreetly indulging the Beast within. Talk about walking a narrow ledge. And that’s not even the worst part. Sex is. You see I can bench press a pick-up truck and that spells disaster in the bedroom. You can’t have any real fun knowing you might accidentally crush a lover while in the throes. Kind of kills the mood.

When a friend’s murder shatters the careful existence I’ve carved out, I come face to face with Damien and Noah, two of the hottest men I’ve ever laid eyes on. They are also the first werewolves I’ve run across since my conversion. The attraction is instant, but complicated, the sex… explosive.


I scan the crowd, checking for some possible action. Men are
like parts of a cow, really. First you have your obvious top
sirloin—men who are cut and fit, with lots of stamina, confidence
and great personality. Then you got your round steak—guys who
can keep up, but are a little too much on the beta side of things.
Rump roasts are your basic teddy bears…cute geeks and others
who’ll let you do whatever you want to them because they can’t
believe they’re going home with you. Finally, you got your ground
chuck. You know the type: total dorks, octopuses, Hoovers who
suck your face off when they kiss. These are guys you don’t even
want to think about until you’ve had four or five shots of tequila
and a Jagermeister chaser.

My eyes alight on two definite cuts of sirloin.

Tori’s high-pitched tones shock my ears like turning on the
radio after forgetting the volume is set on high. She is looking right
at one of my targets, damn her. A low, territorial growl rumbles in
my throat.

“Easy, Max.” Drea touches my arm, the gesture helping me
rein in my baser urge to shove Tori into the nearest wall as I
assert the fact that I have first dibs. Did I mention my dominance
issues? I turn to glare at my friend, only to see her little sister move
forward out of the corner of my eye. The little bitch.
Posted by Unknown at 10:24 PM