Lost In His Arms by M S Spencer...A Review 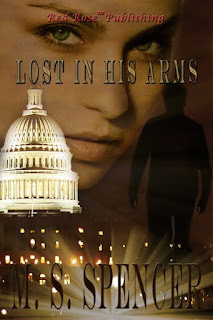 In the chaotic world of the early 1990's, political writer Chloe Gray is going through a creative crisis as she struggles with her column and her book. Enter Michael Keller, a CIA operative. He walks into her life under the most mundane of circumstance and the sparks fly between them, awakening Chloe to new possibilities. Every encounter is hotter than the last, leaving her weak and longing for more, yet Michael's work keeps him away from her for longer and longer periods. When he disappears while working in Vietnam, she meets Emile, a French diplomat.

Emile is debonair and sophisticated, attentive to her needs. He can give Chloe everything she's ever wanted, especially the security she's always craved. When he proposes, she finds herself at a crossroads. Postponing things with Emile, Chloe embarks on a search to find Michael, to confront him about their relationship. Her search plunges her smack into his world, in the middle of a cat and mouse game between two Mid-East powers where both their lives hang in the balance.

Spencer deftly weaves together the genres of romance and political thriller, setting it all against the backdrop of pre-Clinton DC. She takes the reader behind the scenes of political journalism, giving them a glimpse into the press corp and the back door dealings. Bush the First's Washington is realized in vivid detail as Chloe navigates the stories of the day; the Middle East, Vietnam's re-emergence and the disintegration of the Soviet Union.

Chloe is by turns interesting and irritating, but she is always genuine, a hallmark of Spencer's heroines. She comes to life on the pages under this author's skillful hands. Her flaws make her very relatable and I found myself rooting for her as she tried to put her life back together after each encounter with Michael. She is in love with a phantom, someone who disappears and reappears at random moments in her life. I felt for her, trying to hold on to essentially a dream. Chloe is spirited and intelligent, unafraid to go after what she wants.

With nothing in Michael's point of view, we are left to relate to him only through the brief times he drops in on Chloe's life. He talks about duty, but there is no insight into what drove him to espionage. Which frustrated me more than a few times and I wanted him to go away. On the other hand, I do love the way he treats Chloe when he's with her. In these scenes he is clearly head -over-heels and it's at these moments where I cave, and want things to all work out. By contrast, Emile is almost an open book. His relationship with his parents, his career, his affections for Chloe all provide clear motivation for all his actions. I understand Chloe's torture when she has to ultimately choose between them.

The relationship between Michael and Chloe is electric. The moments they are together are magical little vignettes out of time. I wanted them to go on. However,they spend the majority of the book apart, which lends little credence to them developing a working relationship beyond the physical.

Ms. Spencer's descriptions are lush and paint a picture in the mind's eye. We are right there with her characters, roasting in the DC heat, we can smell the bar in Spain, hear the traffic in Paris. Her love of food and wine shines through as well. There are several dishes here that I would love to try.

This book has a solid, original storyline that is a bit more mainstream than romance in my opinion, but its romance elements are hot. I got caught up with Chloe and Michael. Fans of political thrillers should thoroughly enjoy this. There's exceptional dialogue and a cast of wonderful secondary characters that will leave readers wanting more.

For more information about M S Spencer and her works, please visit her website www.meredithellsworth.com.
Posted by Unknown at 8:30 AM