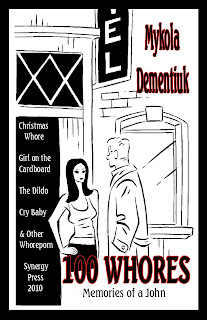 I approached this with a bit of trepidation, knowing that Dementiuk’s writing can be unflinching, his subject matter tending toward the underside of human life that no one likes to talk about. No one would ever accuse him of soft-coating anything. The prose here is brutally honest and lean. Descriptions are visual and economic. Demetiuk does not waste his words and his style evokes Hemingway in some passages. Some of these vignettes made me cringe, some made my jaw drop, yet others had me laughing rather uncomfortably. Still, I had to keep reading. There is almost a compulsive spell that is cast on the first page and I found myself along for the entire strange, uneasy, yet thoroughly engaging ride.

100 Whores is part memoir, part anthology and wholly in-your-face. It features one hundred vignettes covering one man’s sexual adventures in New York’s East Village during the 1960’s and 70’s. These little tales document his search for pleasure and the multitude of characters he meets on this quest.

In the novella, The Christmas Whore, a man fights with his girlfriend and finds himself back on the streets very early on Christmas morning. At a twenty-four café he encounters a woman named Sunny. After a quick fling in a cheap hotel, he takes her back to the apartment he shares with his girlfriend. When she comes home and walks in on the two of them, it’s an O’Henry-like ending that is unbelievably twisted.

This is definitely not for readers who prefer their love and sex with happily ever afters or even warm cozy houses and apartments. Many would be turned off by the title alone. However, if you are interested in catching a glimpse of the seedy side of people, to walk in a world that hardly ever sees the light of day, then I urge you read 100 Whores. It is a powerful and unforgettable reading experience.

Mykola Dementiuk is a Lambda award-winning author. If you would like to know more about him and his thought-provoking works, please visit his website.

For more information and to purchase 100 Whores, please go here.
Posted by Unknown at 2:00 AM