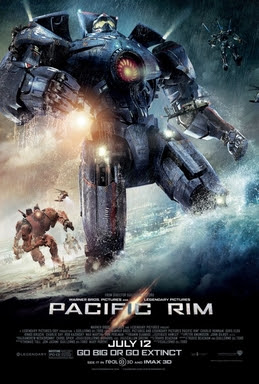 Happy Hump Day Imaginarians!! I've been remiss this week so far, but today I'm bringing you a review of my favorite summer movie of them all so far, Pacific Rim.

I was strapped in for this one from the first frame. Guillermo Del Toro delivers a powerful, high octane anime come to life with terrific characters, a wonderful, yet cheesy script and fx that some of the best I've seen on film.

A dimensional rift has opened in the Pacific Ocean allowing giant monsters known as Kaiju to come through to earth. They attack Pacific Rim cities like San Francisco, Tokyo and Manila. To combat these beings, Earth has banded together and created the Jaegers, giant robots that require two pilots who are completely in sync with one another mentally. As the war drags on, the Jaegers become obsolete as Earth pins its hopes on continental walls to hold back the Kaiju. When the wall fails (and you knew it would) there are only 4 Jaegers left. Raleigh Becket, a former pilot, is called back into service when the remaining Jaegers are sent to Hong Kong.

Charlie Hunnam steals the show as Raleigh. He's vulnerable, smart, strong and has enormous chemistry with his badass co-star Rinko Kikuchi who is Mako Mori. Mako is the assistant to and adopted daughter of, the director of the Jaeger program, Stacker Pentecost. Idris Elba plays Stacker and he does a good job being leader, hardass and father figure. Charlie Day and Born Gorman are terrific as the dork scientists, Geiszler and Gottlieb, who are trying to figure out how to understand the Kaiju. Day is funny, silly, providing a certain comic relief that was great, but got on my nerves after a while. I was hoping he'd get eaten or squashed. Ron Perlman shows his villainous side as Hannibal Chau, a black market dealer in Kaiju parts and other things who helps Geiszler get his geeky hands on a Kaiju brain. There is great chemistry between Perlman and Day.

The fx are huge. Beyond huge. They are definitely what a summer blockbuster is all about. I found myself gasping for breath as the monsters attacked, just like I did as kid and first saw Godzilla. The Jaegers were ultra impressive and I so wanted to try my hand at driving one.

Guillermo Del Toro has created an adrenalized tale of giant robots vs. giant monsters that is an epic summer film you'll want to see again and again.
Posted by Unknown at 7:00 AM