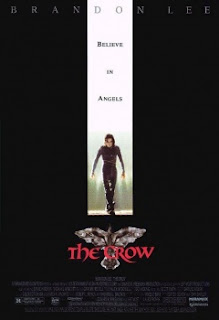 "People once believed that when someone dies, a crow carries their soul to the land of the dead. But sometimes, something so bad happens that a terrible sadness is carried with it and the soul can't rest. Then sometimes, just sometimes, the crow can bring that soul back to put the wrong things right."

Today I want to share my thoughts on a film that resonates with me on every level.  I fell in love with The Crow from the first moment I saw it. It's a glorious, almost Shakespearean, tale of revenge, lost love and justice that spoke to directly to me. Compound that with the tragedy surrounding the production and source material and well, needless to say it seared itself into my writer's soul. This is sacred cinema to me, an untouchable film whose mark must surely be set in stone.

The Crow defined a cultural tide which birthed grunge rock and gave rise to a disaffected Gen X, who had survived the saccharine sugar coma of the 80's, Reagan Republicanism and hair metal. More over, it is the opus of a young actor whose life was cut tragically short. When I heard that a remake was planned, not sequel, prequel, but an actual remake, I was seized with horror. Yes, I bitched about the Evil Dead reboot and snark blasted the upcoming Dirty Dancing retelling, but none of those left me as disturbed as the remake of The Crow.

It is a project that has been in the making for at least four years. I believe that it has been plagued with problems and constant cast changes because no one wants to really touch this mythic tale. And yet, the studio persists. I have heard the cast choices to portray the titular vengeful rocker and ultimate badass, Eric Draven. Bradley Cooper, Mark Wahlberg and Channing Tatum...No, no and no. I cannot wrap my mind around any of them, let alone picturing a single one donning the iconic black and white makeup. They've had various directors attached to the project as well, who have all left for a multitude of reasons. Juan Carlos Fresnadillo is the latest and  most likely to stay. While I like him and he would surely do a decent job, I'm still violently opposed. 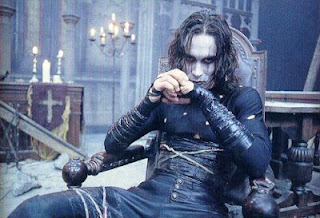 The Crow is a legendary picture in which all the stars aligned  and an epic was born. First, there is the source material. Created from the ashes of James O'Barr's eight year labor of grief to try and overcome the death of his fiancee, The Crow is the ultimate story of the power of love. David Show and John Shirley took this incredible series and turned it into an unforgettable screenplay. Eric Draven, the young rocker murdered along with his fiancee, crosses back to the world of the living on the wings of a crow to take revenge on the thugs who killed them. Brandon Lee, a rising young star was chosen to play Draven and gave the performance of his career. It was sadly to be his last as an on set accident took his life with just eight days left to shoot. Director Alex Proyas, with the blessing of Lee's mother and fiancee, finished the film and it became a dedication to Brandon's life. The rest of the cast, which includes some stellar character actors like Michael Wincott, Tony Todd and Ernie Hudson, is an assemblage of perfection. Each one of them became their characters.

A film  like this required a soundtrack that was second to none and Graeme Revell delivered in spades. The haunting music captured the essence of Eric's post-industrial, hard scrabble world and included bands who literally defined that period of time: Stone Temple Pilots, The Cure, Rage Against the Machine, Nine Inch Nails, The Jesus and Mary Chain and Pantera to name but a few. I can't imagine another soundtrack other than this one. Who would they get now? Danny Elfman? Black Keys? Not.

To add even more storied history to this film, after Lee's death, Paramount Pictures pulled out, leaving the cast and crew high and dry. Miramax then stepped in and ponied up a further eight million dollars to complete the picture. Indeed, The Crow is more than a film, it is both epic and epitaph, a movie that should never, ever be remade.