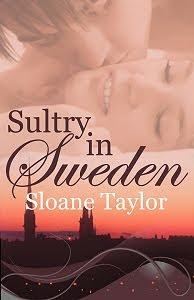 Happy Hump Day!!! I am so very excited because one of my very favorite authors. Sloane Taylor is here rockin' the Imaginarium. I love her stories. Can't get enough of them. They are spicy, funny, sexy and she has one of the most unique story-telling voices out there. She's here to celebrate the release of her newest and hottest, Sultry in Sweden, from Amber Heat and to answer some probing questions from yours truly.

Hi, Melissa, Thanks for inviting me to the Imaginarium. I’m really excited to be here. You’ve created a beautiful, fun site.

What was the inspiration behind your latest release?
A huge 2x4 wielded by my three amazing critique partners.:) Seriously, I’d committed to the Melt the Ice series for Amber Quill Press – Amber Heat. After Finnish Fantasies, book one, was written, I froze. With my CPs help and guidance, Sultry In Sweden became a published reality.

What do you love most about being a writer?
This is a good question and one I’ve never been asked. It’s probably the solitude and privilege to indulge in whatever romantic experience I want any where in the world. Pretty heady stuff when you think about it.

What genre haven’t you tried, yet, that you would love to explore?
Murder and suspense have always intrigued me. A little known fact is that I’m a closet Criminal Minds fan along with reading all the hot authors in that genre. My goal is to write a terrific novel that will have James Patterson give me a high five . LOL

Music or silence when you write?
Absolute silence. There are a few times a month Studs comes home early from work. He heads straight to his computer and whistles while he surfs. I just want to bang my head on my desktop because the mood’s shot and my concentration’s killed. He’s really lucky I love him.:)

Favorite naughty dessert and decadent drink.
Hmm, I’m not much of a dessert eater, but I do love a good drink before dinner. A glass of Stoli’s on ice with one olive is my sure winner. Once in a while, after a special dinner, I do enjoy gelato. The best is one scoop of pistachio sitting next to a perfect ball of chocolate.

This has been fun and I thank you again, Melissa.

BLURB:
Battered hockey player Colt Coltrane arrives in Sweden with one thing on his mind – victory. A bad spill later he’s at the tender mercies of the hottest masseuse he’s ever seen. All his good intentions go straight to hell when he strips for the Swedish iceberg.

Disa Ellstrom has had it with sports figures who always expect more from her than a massage. She can’t believe her friend Carl sent the American goalie to her. Unable to ignore the man’s pain, Disa takes him on and finds her heart melting faster than a spring thaw.

Combine a hot-blooded American and a Swedish spitfire and they’re sure to set Stockholm on fire.

EXCERPT:
Colt stampeded down the stairs, cursing with each jolt to his spine. He shoved open the door and skidded across the slick marble floor, then sidestepped the glass table and scanned the crowd beyond the mammoth bouquet plunked in the center. He spotted Disa across the lobby, headed for the sidewalk.

“Disa!” he hollered not caring about the people who turned and frowned, especially a silver-haired woman who sniffed and curled her lip. “Hey, Disa, wait.”

Some big guy, all handsy feely, wedged himself next to her and pushed them through the revolving door.

Oh, shit.
He stopped short, royally screwed. She had to be horrible mad at him to pick up another guy in a matter of minutes. Insane thoughts and images raced through his brain, colliding with logic. He knew in his heart she wasn’t the type to troll or react out of spite. Didn’t matter, he was determined to correct this fucked up night of lost opportunity.

Colt slammed his palm against the glass side door and shoved his way into a hellacious rainstorm. Rain splattered across his face, but he managed to see Disa and Romeo duck into a dark entryway a few stores down the street. He charged after them and sloshed to a stop.

“What gives? I thought we were on for tonight. Why are you with him?” Colt jerked a thumb toward the face hidden in shadows. “Disa, if it’s about what happened upstairs, I’m really sorry. I had no clue Jake had it planned. It’s not my scene. I swear.”

He reached for her.

Stefan stepped forward, catching Disa up in his arms, and Colt’s heart turned to stone.

What the shit is she doing with that prick?

“Get away from my wife.”

“You’re married?” His clenched gut rolled over itself.
Posted by Unknown at 10:00 PM