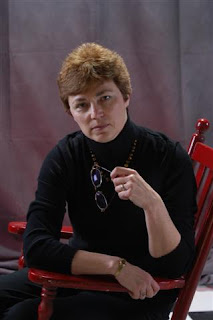 Imaginarians, I am very excited to welcome author Peg Herring in the house today. She is the wicked cool writer of MacBeth's Niece and Her Highness' First Murder. Today she is talking about the importance using the most effective dialogue tags. She has an awesome Blog Crawl going on as well as a cool contest.

Thanks, Melissa, for letting me stop at your site on my Blog Crawl.
Yesterday’s post, “Slowing Readers=Bad Policy”, is at http://candidcanine.blogspot.com.

“I love your new trousers!” she panted. A cartoonist named Edward Stratermeyer invented the Tom Swiftie in the 1920s, and people have been having “pun” with them ever since. (“I fought with Geronimo,” said Tom bravely.) However, a writer is in trouble if he strays unknowingly into the realm of the Swiftie. (“There's room for one more,” Tom admitted.)

Adverbs attached to a dialogue tag (“I presented my case to the judge,” Tom said briefly.) or verbs that replace said with a little too much oomph (“Use your own toothbrush!” Tom bristled.) easily become heavy, irritating, or downright silly. (“Let's all play an A, a C sharp, and an E,” cried Tom's band with one accord.)

Said is the most effective dialogue tag. It is so unobtrusive as to be almost invisible, but it gets the job done. Dialogue should cue the reader as to the speaker’s tone, volume, and mood. If the words spoken are not enough--and it is sometimes hard to put a lot of emotion into a “No” or an “I won’t”--there are ways to make it work. One of them is to add an adverb to the dialogue tag, but most editors require that this be done sparingly. Another way is to add a brief sentence. Rather than, “‘I won’t!’ Cyril shouted”, the lines might read, “Cyril’s face turned a deep red as he spoke. ‘I won’t!’”

Dialogue tags are often unnecessary. Nothing is worse than a page full of “he said” and “she said”, especially when there are only two people talking. A periodic reminder, a sentence that tells what the character is doing as he speaks, is preferable. Writing with overdone or repetitive dialogue tags runs the risk of sounding repetitive or Tom Swiftie-like, making a joke out of a serious situation.

Who would want to steal modern art?” asked Tom the detective abstractedly.

Poser #3-Name three authors who make good use of humor in their novels. 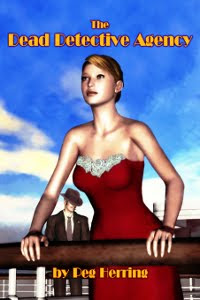 The Prizes-Weekly prizes (your choice of THE DEAD DETECTIVE AGENCY in e- or print format) drawn from the names of those who comment on the blogs as we go. Comment once/day, but the first commenter each day gets entered twice in the drawing on Saturday!

The Pitch: THE DEAD DETECTIVE AGENCY, First in The Dead Detective Mysteries, paranormal mystery. Tori Van Camp wakes in a stateroom on a cruise ship with no memory of booking a cruise, but she does have a vivid recollection of being shot in the chest. Determined to find out what happened and why, Tori enlists the help of an odd detective named Seamus. Together they embark on an investigation like nothing she’s ever experienced. Death is all around her, and unless they act quickly, two people she cares about are prime candidates for murder.

Read more or buy the book at http://www.ll-publications.com/deaddetectiveagency.htm or Peg’s website, http://pegherring.com.

The Perpetrator: Peg Herring writes historical and contemporary mysteries. She loves everything about publishing, even editing (most days). Peg’s historical series, The Simon and Elizabeth Mysteries, debuted in 2010 to wonderful reviews. The second in the series will be available in November from Five Star.

The Pathway: tomorrow’s site is http://marilynmeredith.blogspot.com, and the topic is “The Dreaded Adverb”.
Posted by Unknown at 4:25 AM