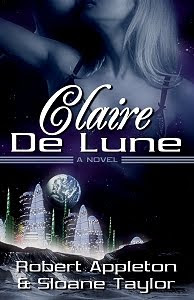 I am so excited, Imaginarians. Here with me are two amazing writers, Robert Appleton and Sloane Taylor, co-authors of Claire De Lune, the newest hit from the Amber Heat imprint at Amber Quill Press.

Rob, you’re in the UK and Sloane, here in the States, how did you connect? What was that initial first contact like?

Sloane: It was love at first keystroke.:) We once wrote for the same publisher and connected on a group chat. Rob and his wry sense of humor, which is just as sick as mine, stole my heart. He off-handedly joked we should write a book together. The chat ended and that was that, until three years later when he emailed with an enticing offer to co-author Claire De Lune. Best decision I’ve made in a long time.

Both of you are established in such diverse genres. What was it about the other’s writing that made you decide to co-author a book together? Who approached who?

Sloane: I’d read several of Rob’s books before we ever discussed collaborating. His imagination, world building and quick wit swept me into a genre I’d not read before. When he suggested we work together, I had to agree.

Rob: After I’d finished a fairly mild first draft, I realised I’d fallen short of my initial vision for the project. The mystery more or less worked and I was really pleased with the sci-fi elements, but the Sloane Taylor sparkle, that hot magic permeating the characters, was missing. I’d gotten so wrapped up in the mystery and the male camaraderie that I’d given the female characters short shrift. And no one writes spunky, sexy women like Sloane. So I asked her to jump on board. Luckily, she said yes, and a full freaking year later we got started. :winks:


I’ve been told with writing duos, one person usually takes the lead creatively, the other editorially. Did your partnership break down this way or was it more fifty-fifty?

Rob: Hmm, how can I answer this without sounding whiny and getting a slap, or being an arch chauvinist (and getting a slap)? Sloane got the ball rolling on the editing well before we started adding scenes. We both came up with new sub-plots for her main character, Evelyn Lyons. And from then on, it was pretty much fifty-fifty.

Sloane: Rob’s the creative genius. I just follow behind like all good women should. Excuse me while I vomit.:) Actually, he is a brilliant writer. Plot line, creating new worlds and weaving in suspense is Rob’s forte. Me – I’m the comma queen and browbeat him to follow the rules of writing.

How difficult was it to mesh your distinctive styles into a single cohesive voice? Was there ever a point where either of you wanted to smash the other into tiny unrecognizable bits?

Rob: You see those partial people on our book cover? Well, they’re all that’s physically left of the two writers of this book. As you can see, I came off worst.

Sloane: Haven’t a clue how it meshed, but somehow it just worked. I never felt that way, but I sure bet Rob did! Good thing we live an ocean apart. I’m a real pain in the ass since I’ve turned procrastination into an art form. Groan.

Sloane, your stories are firmly grounded in the here and now, what was it about this tale that compelled you to venture into unexplored territory? Was it difficult stepping into a such totally unfamiliar genre?

Rob had created strong, diverse characters that came alive on the page. It was easy to fall in love with them. I’m a romantic through and through and had no problem with sci-fi sex. I believe in love and enjoy writing it no matter where in the galaxy the couple may be.:)

Rob, you are a sci fi writer. What is your take on the place of romance and erotica within the genre amongst the more hard core and straight sci fi?

That’s a fabulous question, Melissa, and unfortunately one I don’t have enough space to answer. On the face of it, those genres—sci-fi and romance/erotica—are opposites and incompatible. One is predominantly male, the other female; one tends toward heartless intellectualism, the other toward neurotic female thinking. The readerships are almost proverbially divided. So when you’re meshing the two genres, you have to tone down the extremes. Don’t eliminate the hard science, use it sparingly; don’t have the characters boinking every other page, make those clinches count. It’s an extremely hard balance to find but it can be done.

My personal preference is for science fiction stories with romantic/erotic elements as opposed to romances where the sci-fi is just a backdrop. In my opinion, particularly when the stakes are life or death, characters should think about survival first, boinking second. Unfortunately, that’s not always the case in book of this type.

Sloane, as an erotica writer, what would you say is the biggest misconception that people have regarding this genre?

What surprised you the most about working with each other? How has it impacted your own individual writing?

Rob: I think it’s made my writing more concise, a little crisper off the bat. My natural inclination is toward over-description, and I love laid-back Victorian prose. So having a ruthlessly contemporary style to brush up against really shook my purple prose loose. Of course, I’m writing a Victorian-age steampunk now, so round and round we go…

Sloane: I like sci-fi! Working with Rob is easy and I’m grateful he’s patient. Our experience has taught me to be more careful of details and dig deeper into my characters lives.

Based on your experience with each other, would you collaborate with other authors if approached?

Rob: Any time, Melissa. Send me what you got. :winks: But I’d think twice about working with stinky Sloane, if I were you. She swears like a Tarantino gangster and has a drinking problem.

Sloane: Not a snowball’s chance on the sun. I enjoy working with Rob because he doesn’t push even though I gave him carte blanche to spank me when I screw around. But he has to use the new whips. LOL

What other genres would either of you consider attempting that you have not tried before?

Sloane: I’d love to write a mainstream mystery in first person. I’ve been toying with one for a year and haven’t built up enough courage to plunge in.:)

Rob: I’d love to write a full-on haunted house horror. Immediately, in fact. And I’ve always wanted to write a medieval novel. After sci-fi, history is my big reading passion. I’d also like try my hand at a real-life disaster/survival novel—ordinary people under extraordinary circumstances absolutely fascinate me, especially when the forces of nature are involved.

What’s next for both of you? Are there plans to continue your collaboration any time soon? Will there be a sequel to Claire De Lune?

Sloane: Take it away, Rob.

Rob: Not a sequel, no, but a kinda/sorta prequel featuring our favourite secondary character from CDL—the pageant doctor, Grace Peters. It will be risky and quip-laden and there will be much sci-fi sauciness. After that, we’ll have to consult our horoscopes. I believe we share the same star sign—Sagittarius. Unfortunately, Sloane may have priced me out of the market by then (her 900 number is killing mine).

Who are your major writing influences? Who or what inspired you to start writing?

Sloane: Too many influences to mention, Melissa. It can be the small thing that sets my mind to wandering.:) I’d never considered writing until seven years after the death of my second husband. Days went by and all these images like a silent movie flooded my brain. They drove me crazy until I finally wrote them down just to find some peace. After Beth Anderson, a dear friend and published author, used her infamous two by four those words became my first book Teddi Turns On. Since then life’s been good.:)

Rob: I would have to say the great Victorian speculative/adventure fiction writers inspired and influenced me the most. H.G. Wells, Jules Verne and H. Rider Haggard wrote many of my favourite works of imagination ever. Haggard’s ‘King Solomon’s Mines’ and ‘She’ in particular are biggies. Also, Edgar Rice Burroughs’ ‘John Carter of Mars’ was a huge influence on me. Somewhere inside, my twelve-year-old self is turning zero-g cartwheels celebrating what I get paid to write.


Aside from writing, what are some of you other passions and pursuits? I know Sloane is an avid cook and Rob, you are quite the sportsman.

Rob: I play 5-a-side soccer every week, which is insanely paced, so I mustn’t be as unfit as I sometimes think. Kayaking is a great pastime but our family trips have dried up a bit these last few years. I’m also a big-time movie geek who loves old swashbucklers and 1950’s sci-fi. And anything directed by Oliver Stone.

Sloane: I love to garden in the spring and hate it when the bugs invade. I grow all my own green beans, tomatoes and herbs. Throughout the season I freeze them to use all winter long. It’s a treat to have spaghetti gravy made from our garden goodies in January.

Do you have any favorite indulgences that might surprise your readers?

Sloane: Murder and mayhem. Love them. There’s nothing better than curling up with a good mystery book or TV program late at night.

Rob: holds up his Schwarzengger collection for protection: Okay, okay, so I was first in line to watch ‘You’ve Got Mail’ when it came out. What can I say? I like feel-good rom-coms. I also can’t get enough of sappy supernatural TV show ‘Ghost Whisperer’, but the reason might not be so surprising. Three words: Jennifer Love Hewitt.

Rob: Food for thought, a feast for the imagination, and a taste for more.

Sloane: Good question and one that made me think. I want readers to know there is still romance in our universe and it's there for each and every one of us when we least expect it.

Thank you both so much for spending some time here at The Imaginarium. I wish you much success with Claire De Lune. I myself can't wait to have it in my hot little hands.

If you want to know more about these fantastic authors and their work, you can visit their respective sites: Sloane Taylor and Robert Appleton
Posted by Unknown at 5:20 AM