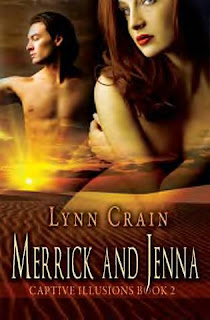 Hello out there Imaginarians! It is Wednesday and that means it's time for another wonderful author interview. I love to spotlight authors, we are an amazing and varied profession with so many cool people. It's very rewarding for me to get to know my fellow authors and their work.

What was the inspiration behind your latest release?

Well, I’ll probably have two out at once...LOL! One will be a new series I’m starting and its inspiration was a male revue. It’s called The Harvester and should be out in the fall sometime. The second is a continuing series titled Captive Illusions: Merrick and Jenna, and the inspiration for it would have been Hugh Jackman.

When did you know that you wanted to be a writer?

Since I was eleven when I sold a poem and saw it published in a magazine.

What do you love most about being a writer?

Freedom. This is a career you can take anywhere in the world with you. The only tools you really need are your mind, pen and paper.

What genre haven’t you tried, yet, that you would love to explore?

Probably steampunk. Or maybe even horror romance. I know those are two off-beat genres but I’ve pretty much tried everything else except sweet romance.

If we looked on your bookshelf right now, what are some of the titles we would find?

Music or silence when you write?

If you could take one of your characters out on the town, who would it be and what would you do?

There are two. The first is a guy in a fantasy romance that hasn’t seen the light of day for years. His name is Mallick Pendragon and he’s a kick-ass night. Once I get done with what I’m working on, Mallick and Erin will be revamped and put out to play. The next is Logan MacKenize from a Scottish romance I’m working on. He’s wonderful and my critique group fell in love with him the moment they saw him.

I’m boring on the dessert front as I am one of those rare people who don’t care for chocolate. I would more than likely have carrot cake or key lime pie. Now the drink, I’d be a little more interesting. I love Sex On The Beach and something called a Warp Core Breach. You could only get those at the Star Trek Experience at the Hilton in Las Vegas. I had one for my 40th birthday and was happy for days. LOL!

To find out more about Lynn, please visit her site http://www.lynncrain.com/

Merrick never expected to be part of his brother, Iain’s wild sexual games. Once it is over, he realizes he wants to find what Iain has found…his soul mate. When he meets Jenna, he’s afraid she is the one. But she certainly isn’t what he expected. She’s a hunter or so he thinks. But how can someone so innocent belong to a group as cold as the Hunters?

Jenna cannot believe her eyes when she sees Merrick…talk, dark and brooding…and everything she’s ever wanted in a man. There’s just one problem. He’s an immortal and her family hunts immortals. But he holds the key to her deepest, darkest fantasies. And the more she’s with him, the more she realizes her father has deceived her. But is she ready to give up everything she knows for an uncertain future?

Excerpt
She felt his hands at the back of her head. Soon the silken scarf was around her looking into the bluest eyes she had ever seen. Her breath quickened as those eyes watched her intently. “Why are you staring at me?” she questioned softly.

“You’re beautiful,” he answered without hesitation. “And I’d like to hear your explanation of why I should kill a beautiful woman.”

Jenna felt the heat in her cheeks. She had wanted to hear those words from someone for so long and here, a sworn enemy, told her the very thing she needed to hear. “Thank you.”

“You’re very welcome.” He ran his fingers along her bare body in a straight line, paying special attention to her breasts and legs. Kneeling in front of her between her legs, he ran his hands along her inner thighs. “But you still haven’t told me why you think I’m going to kill you.”

She licked her lips slowly. “I betrayed you and your clan.”

“Hardly. If it hadn’t been you it would have been someone else,” he practically purred in her ear. “What I really want to know is all your sexual fantasies. All of them.” He pulled the scarf off her face and looked at her as if judging what her reply would be.

Her heartbeat went up a notch. “Why?”

“I plan to fulfill each and everyone of them.”

“Really. And just how do you plan to do that?” Jenna stared at him. She had a lot of fantasies that she expected never to be fulfilled. And a lot of those fantasies had nothing to do with sex but more with a lifetime full of precious moments.