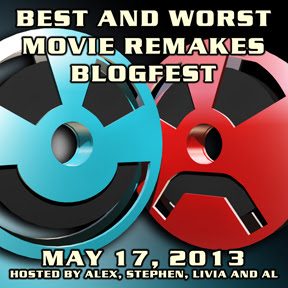 Happy Friday!! It's time for the awesome Best and Worst Remakes Blogfest. Hosted by Alex J. Cavanaugh, Livia Peterson, Dragon Father Al Diaz and Stephen Tremp, we are here to skewer the worst and praise the best.

I like to start off with bad stuff first. So here are my Worst Remakes Ever:

What were they thinking? The subject matter really isn't that timely anymore unless you're talking the Ladies Who Lunch Tennis Set. And really no chemistry with Annette Benning, Debra Messing, Jada Pinkett Smith, Meg Ryan and Eva Mendes. YAWWWNNN... Norma Shearer and crew were so much better and wittier.

All The Kings Men

Why take a brilliant actor like Sean Penn and stick him in a play by play remake? Completely unnecessary to remake an already amazing film.

Peter Jackson, you dumbass! We did not need a lame silly remake of a perfectly good giant ape film. I don't care how great your fx were ,the story stunk to high heaven and so did the acting. Your cast was more boring than Hayden Christiansen's performance in the Star Wars prequels. Like James Cameron with Avatar, you sought to dazzle us with frosting and hoped we would ignore the lack of substance underneath.

Will Smith, I love you, but you really did an injustice by bringing us this cross cultural nightmare. Hello! You can't call the him the Karate Kid if he is learning kung fu.

Holy hell! This American remake of a brilliant Japanese horror flick was just pure comedy. I spent the entire time laughing at the ridiculousness of it.  Naomi Watts completely sucked and that creepy kid of hers was the only horror-esque part of this movie.

And now for my Best Remakes

Best. Remake. Ever. Now I loved the original The Thing From Another World, but Carpenter's flick was off the chain incredible. it is one of my all time favorite performances by Kurt Russell as well as one of my fave movies of all time.

Go ahead roll your eyes, call me crazy, but I thought this was creepy, atmospheric, stylish, sexy and had some great wolf attack scenes. It did awesome justice to the old Lon Chaney film and the cast was just brilliant. I love the unrated version and watch it whenever I need a pick me up. :)

Second best remake ever. Gary Oldman and Francis Ford Coppola did an outstanding job bringing Stoker's novel to life. Far superior to the old Bela Lugosi film, which really could not delve into the sexuality of the Count. The cast was amazing and the script very well written.

James Mangold really delivered on this remake of the old Delmer Daves directed Glenn Ford vehicle. Intense from start to finish, this one was a worthy heir to the original. I loved all of the performances, especially Bale as Dan Evans.

George and Brad were just incredible. I loved this movie from start to finish. It was smart, sexy and oh so witty. I love me a great caper flick and this one delivered in spades.

Dawn of the Dead

Are you sensing a theme here? LOL Yes, I love my monster movies. I really dug George Romero's original, but this one made me love zombie movies forever. I watch it whenever I get a chance, even the spliced up versions on Syfy and AMC.

Go ahead and debate, call me insane, call me brilliant. (LOL well that last one is just a wee hope).

Have a super weekend my friends, my family!!