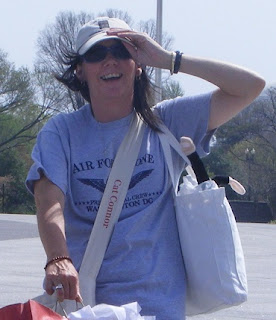 It's Happy Hump Day, Imaginarians and have I got a treat for you. The awesomely brilliant and engaging mystery writer, Cat Connor is here with us today. She hails from New Zealand and is the author of four Byte novels. I recently interviewed her about her career and her new release, Flashbyte. Enjoy...

1. Tell us a little about your latest, Flashbyte. It sounds very intriguing, a story I probably won't be able to put down.

Flashbyte is the fourth byte novel, and it goes a little something like this:

Woken by the news that she’d been strangled in a parking lot, SSA Conway knew it was going to be an interesting day.


The incident escalated into a week from hell with bank robberies, snipers, truly bizarre packages, and more reports of her death. What Ellie did not expect was old friends (good and bad) reappearing, see-sawing with more than the usual amount of kickass energy. Just so Delta A didn’t get bored, the universe tossed in an extraordinary rendition, lost memory, and a visit to the past that anchored the present.

2. Who or what inspired you to write? Did you always know you wanted to be a writer?
If you talked to my friends (those who knew me when I was a teenager) they’d tell you they always knew I’d be writer because I was always writing. It’s funny because I don’t remember writing that much. Or I don’t think I do… which might be different. I have fond memories of writing with my best friend and of getting some pretty awesome feedback from various creative works I churned out in high school but I didn’t think I would be a writer.

What inspired me to write, well, I had nothing decent to read. It really was that simple. Most of the women depicted in fiction were pathetic, screaming, cannon fodder. I took offense. I’m a woman and I am quite capable of taking care of myself and others, so why weren’t real women starring in fiction? I don’t mean it in a feminist way either. I’m all in favor of people holding doors etc. That’s a common courtesy not an inference of weakness.

Moving on, I wanted to read a story with a real rounded female character and one who was likable. It seemed fictional women were either pathetic or evil bitches as I was growing up. Neither sat well with me. Neither echoed the women in my life. So when I started writing (to amuse myself) I wanted a strong main character. And that is what inspired me to write.
Of course now, we have quite a few to choose from and that’s awesome!

3. Do you have a particular routine when you write? How do you keep your creative juices flowing?

Routine? Yes, let’s call it a haphazard routine. I start work before the kids get up in the morning, accompanied by Classic Hits - so I don’t forget the time. Generally, early mornings are relegated to email, social network, and if I have time reading work from the day before. Once the kids are at school and Romeo is walked, I settle down to write or do interviews - whatever is the most pressing. I move from the radio to my music.

Music helps me focus. Certain songs will instantly transport me to Ellie’s world. Depending what I’m writing, as in which type of scene, my music choice varies (but not much, work music is work music!) it tends to be Bon Jovi, Lorenza Ponce, Kevin Costner and Modern West. Sometimes Ellie demands something else, and then I have to go searching through CD’s or iTunes!

How I keep my creative juices flowing is mostly with music but sometimes other things work better. I find that if I’m just not getting a scene then watching an episode of Human Target or NCIS helps. Sometimes there is nothing else for it but to walk away and wash dishes. (Or something else that required zero thought.) If it’s really hard for me to sit down and write because I’m just not in the right headspace - then I’ll take Romeo for a long walk, clean the house, bake, and play ‘Bounce’ really loud and maybe hang out on twitter until I feel like doing some work.

4. What was the best piece of writing advice you have ever received? What would you say to a group of aspiring writers about your experiences in the publishing world?
I’m about to start a writing group at our city library. Which I am super excited about. I get to host the group. (How cool is that?) I’m going to get to answer these in person, so this is kinda like a rehearsal for me.

The best piece of advice was “write another book” and that came from Jeffrey Deaver. We were talking about a situation that we had both experienced and that was his advice. He was right. Everything worked out and by the time I got my rights back for my first novel, I had another book ready to go.

But, when it works, its one helluva buzz.

I’ve been asked to write a short story for a really fun anthology - which I have started and I am enjoying.
The 5th byte novel - Soundbyte - was submitted to my publisher a few weeks ago. Playing the waiting game at the moment. (Nerves? Oh hell yes.) I’m also working on a new byte novel, which has no name. I’m hoping it will find a name and won’t be unnamedbyte forever. It’s fun and there is a new character.
And, I spent some time tweaking a New Zealand mystery novel, which needs more work so I’ll get to that at some stage. My enthusiasm comes and goes for that book, I’ll get there. 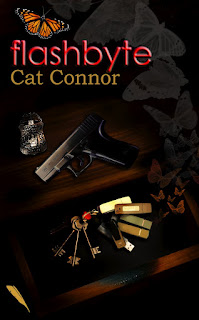 From Flashbyte: Chapter 4, Return to Sender:

There were two holes in the front windshield. Cracks radiated outward, causing the windshield to resemble crazy paving. I shrank down in the seat and released my Glock from its holster. Peering between the front seats, I saw remnants of the back windshield hanging in the frame. I grabbed the radio and opened a channel.


“Go for Conway. This is Officer Konstram, I’m two minutes away. Over.”


As I depressed the button to reply, another shot rang out. The passenger side-window blew all over the car interior.


I dropped the radio and opened my door. Josh Konstram’s voice followed me as I slipped out the car,


I could hear the radio going nuts. I wasn’t going back in to answer it. I was much safer outside using the car body as a shield. I yelled into the store. “Get down, there’s a gunman!” People who had been standing there, bewildered, dove for cover.


My phone rang. I scanned for the shooter. Another car near me was hit with several rounds. A bullet lodged in the front of the building; moments later one of the plate- glass windows shattered and fell inward. I had no target and it was frustrating not being able to shoot back.


My phone was still ringing.


It seemed that my phone wasn’t going to stop. I ducked lower, crouching as close to the ground as I could, by the hood of my car and hit the speaker button.


“Coming around the back of the building by the dumpster.”


“I think the shooter is in the parking lot across the road, maybe in a car.” I said and disconnected.
Sirens screamed, bouncing off the building and deafening me. Lights flashed, police cars converged on the area. I wanted to move. I heard a whistle from behind me. When I glanced back I saw Doc peering around the corner of the building.


Another shower of glass rained down upon me.


Bio:
New Zealander Cat Connor is the author of The_byte series of FBI thrillers published by Rebel ePublishers. So far the series contains Killerbyte, Terrorbyte, Exacerbyte, and Flashbyte - her latest thriller about the life of SSA Ellie Conway. Her first novel, Killerbyte, was a finalist in the 2010 EPIC awards.
Cat spends her days writing with her rescue greyhound - Romeo, keeping her company.